Should You Be Chewing Sugarless Gum?

A question posed by a recent headline in Evidence-Based Dentistry seems to beg only one answer: “Well, duh!”

If you’re going to chew gum at all, of course sugarless is the way to go. Sugars make the mouth more acidic as harmful bacteria feed on the sweet stuff. But does sugarless necessarily prevent decay?

For the current study, researchers analyzed data from 38 previous studies on the impact of sugar-free gum on all aspects of oral health. All together, they showed that there was significantly less decay when sugarless gum was used. The effect was even greater in studies that looked only at gum sweetened with xylitol.

And that makes sense, considering that xylitol is known not only for NOT causing cavities but actually helping prevent them. For instance, it’s been found to reduce harmful bacteria such as S. mutans while leaving helpful bacteria alone.

Xylitol isn’t the only sugar substitute with that effect, though. Erythritol, which we’ve looked at before, also seems to inhibit the “bad bugs” and may even be more protective than xylitol. But it doesn’t seem to be used much in chewing gum right now.

More common is stevia, another zero-calorie sweetener that appears to be anticariogenic – that is, protective against cavities, clinically known as dental caries. In vitro studies – studies done outside the body – have found that

Stevia extracts have anti-bacterial activity on Streptococcus mutans, Streptococcus sobrinus and Lactobacillus acidophilus, organisms that are closely related to the production and development of tooth decay.

More, both in vitro and in vivo (inside the body) studies have found that they reduce the production of acids by the bacteria, along with “a lesser effect of the demineralization of the enamel in comparison with other sweeteners.” 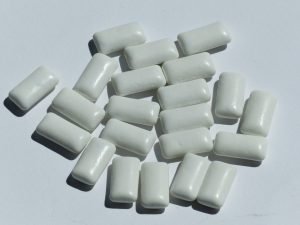 One triple-blinded study published this past summer compared stevia directly with xylitol in girls aged 8 to 13 who had more than three decayed, missing, or filled teeth. Saliva samples were taken from all 20 participants who were then divided randomly into two groups. One was given stevia gum while the other got xylitol. Additional saliva samples were taken 15 minutes and 1 hour after they chewed the gum to check for the presence of S. mutans.

Since the study had a crossover design, each group also chewed the other type of gum and again gave saliva samples. In both cases, researchers found a decrease in S. mutans after the gum chewing, leading them to conclude that

So can chewing sugarless gum help keep your teeth healthy? There’s not enough evidence to say that for sure. But we do know what works when it comes to prevention: Eat real food, minimizing sugars and other refined carbs, and practice good oral hygiene.