The Dental Benefits of Breastfeeding 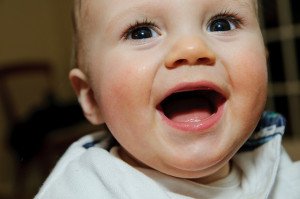 When it comes to infant health and development, breast, as they say, is best. And you may already know that breastfeeding lowers a baby’s risk of things like SIDS, allergies, asthma, ear infections, severe lower respiratory infections, obesity, pneumonia and more.

But did you also know it also supports good orofacial and dental development?

According to a 2013 study in the Journal of the American Dental Association, children who breastfeed “may develop a more favorable occlusion [bite – the way the teeth come together] in the primary dentition.” A more recent study, published earlier this summer in Pediatrics, found that there may be even greater improvement for infants who breastfeed exclusively for longer periods. As WebMD reported,

Similarly, children who exclusively breast-fed for three months to six months were 41 percent less likely to have moderate to severe misalignment of the teeth. Breast-feeding six months or longer reduced their risk by 72 percent.

But they also found that pacifier use interfered with this healthy development – as can other habits such as thumb-sucking or physical impediments such as a tongue-tie. The former, of course, can be broken, while tongue-tie can be alleviated through a surgical procedure known as frenectomy.

How can something so simple as breastfeeding have such an effect on how the teeth come in? As myofunctional therapist and dental hygienist Carol Vander Stoep describes it in her book Mouth Matters,

The coordination required for an infant to swallow and breathe at the same time while breastfeeding is also a critical step in learning correct swallow patterns. In a proper swallow, the lips touch together lightly. The lower jaw moves slightly upward to touch the upper teeth. The tongue lightly moves up and reinforces the good arch form. There is minimal TM/jaw joint compression. Good breathing and swallowing habits maintain the balance of forces.

On the other hand, the tongue of a bottle-feeding baby creates a strong vacuum against the roof of the mouth and at the back of the throat. This can form a very high palatal vault, reduce the width of the arch, and constrict the sinuses and airway.

There’s also evidence that breastfeeding may protect your child against caries. A new review of the science in Acta Paediatrica found that children who were breastfed more through their first year had a lower risk of developing caries. However, they also found that those who breastfed beyond that time had a higher risk, particularly if they fed at night or more frequently. What they couldn’t say is what role other habits – diet, hygiene and such – might be at work in elevating risk. There just wasn’t enough evidence to say.

Regardless, we do know that the benefits of breastfeeding far outweigh any negatives. As the American Academy of Pediatrics notes, it’s not just a lifestyle choice. It’s a matter of public health.

Breastfeeding and human milk are the normative standards for infant feeding and nutrition. Given the documented short- and long-term medical and neurodevelopmental advantages of breastfeeding, infant nutrition should be considered a public health issue and not only a lifestyle choice. The American Academy of Pediatrics reaffirms its recommendation of exclusive breastfeeding for about 6 months, followed by continued breastfeeding as complementary foods are introduced, with continuation of breastfeeding for 1 year or longer as mutually desired by mother and infant.