Easing the Pain of Toothache 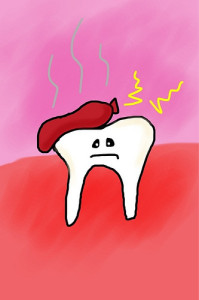 When you’ve got a toothache, two thoughts crowd out most all others: how much it hurts and how much you want it to stop hurting. Many reach for something like Orajel or Anbesol to get them through until they can get to their dentist for real help. The active ingredient in these products? An anesthetic called benzocaine.

It’s somewhat amazing that although this drug has been used to ease dental pain for more than a century, we’ve never had any definitive data on how well it works on toothaches in particular. That’s changed now, thanks to a study published in the Journal of the American Dental Association.

Its results were pretty straightforward.

“Both 10% and 20% benzocaine gels [common concentrations for over-the-counter products] were effective in the temporary relief of toothache pain and were well tolerated,” the researchers wrote. The stronger dose also acted more quickly.

About 80% of test participants who used the gel rated their “satisfaction” with pain relief as “good” or better compared with 61% of those who were given a placebo.

In some cases – such as with long-term use or overuse – benzocaine can trigger a condition called methemoglobinemia, in which oxygen levels in blood are greatly reduced. Seeing more cases of this disorder cropping up in very young children (as “blue baby syndrome”), the FDA has now twice recommended against teething gels that contain the ingredient. They recommend using non-benzocaine gels instead, or providing chilled teething rings or gentle gum massage.

Fortunately, there are also some good home remedies for temporarily relieving toothache pain, as well. A cold compress on your cheek may help, as may applications of vanilla extract (pure, not imitation), garlic or clove oil on the tooth and surrounding gums. An added virtue of garlic and clove oil is that they have antimicrobial properties, helpful when a tooth is hurting because of infection. (More home remedies)

That said, while pain is something we want to go away, it’s an important signal from your body that something is wrong. Killing pain may bring temporary relief, but it’s vital that you see a dentist as soon as possible to discover the source and get a real and lasting solution. Tramadol 50 mg online http://www.024pharma.com/tramadol.html

The longer you wait, the worse it’s bound to get – and the more expensive and time-consuming to solve.