Another day, another study exploring whether sugar-free gum might actually protect against cavities. Regular readers of this blog may remember that earlier studies have suggested as much. 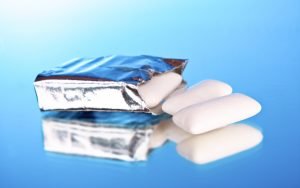 The latest, recently published in BMC Oral Health, looked specifically at the effect of sugarless gum on levels of Streptococcus mutans in the mouth. This is one of the key bacteria involved in tooth decay. Thirteen studies total were included in this review of the science, and all but one zeroed in on xylitol.

Overall, the evidence showed that “xylitol gum significantly reduced the load of Streptococcus mutans in comparison to all controls,” although the researchers noted that all the studies they looked at appeared vulnerable to bias.

Still, we’d expect xylitol to have some effect because, unlike sugar, it can’t be metabolized by S. mutans. Consequently, it keeps conditions in the mouth more alkaline. It also makes it harder for S. mutans to cling to tooth surfaces, where it can colonize, forming an oral biofilm (plaque).

The effect of chewing xylitol-containing [sugar-free gum] on Streptococcus mutans counts is potentially long-lasting, with evidence suggesting that it lowers the oral bacterial load for up to five years, after 2 years of use.

But other recent research suggests that xylitol – as well as sorbitol – does its best in sugar-free environments. Add sugar to the mix, and its power weakens.

For a study in the Archives of Oral Biology, researchers developed oral biofilms and exposed them to different concentrations of xylitol and sorbitol, both with and without sucrose present. (Sorbitol is another sugar alcohol commonly used in sugarless chewing gum, while sucrose is basically table sugar.)

When no sugar was present, both xylitol and sorbitol were found to inhibit the growth of S. mutans biofilms, though not so much in Candida albicans biofilms. But when 1% sucrose was added, both lost some of their power against S. mutans.

The story was similar with mixed biofilms. Minus the presence of sugar, xylitol and sorbitol inhibited biofilm formation, changing the biofilm structure and interfering with its ability to cling to the tooth. But in the presence of sugar, this didn’t happen quite so readily. In fact, not only did it reduce the sugar alcohols’ ability to inhibit biofilm growth, it actually “enhanced the mixed-species biofilm formation.”

All the more reason to keep any added sugars to an absolute minimum.

As for the benefit of chewing xylitol gum, so long as you want to and you can, it could be a bit of help in keeping your mouth healthy. It’s certainly not the most important part, though. As ever, that falls largely to diet and hygiene, with diet being #1 – not just by avoiding sugars and chemical-laden ultra-processed junk but getting plenty of all the vitamins, minerals, and other nutrients that your teeth and gums need to stay strong and healthy.