Did you hear the one about the dental technician who lost a finger after years of holding x-ray film in children’s mouths without protection?

The story is anecdotal but definitely no joke! According to DentalBuzz, it started with a broken finger, made vulnerable by

a giant cell tumor in the first (proximal) phalange of her ring finger that had eaten everything except a small sliver of bone and that was what had snapped. These are very, very rare in small bones like those found in our fingers; most osteoclastomas happen in the larger bones like femurs and such. Hmmm.

Even though the tumor was benign, because of the damage done, the possibility of regrowth and other factors, the decision was made for my friend to have her ring finger amputated.

Stories like this are an important reminder that dental imaging is hardly risk-free. In recent years, research has suggested a heightened risk of meningioma, brain tumors and possibly other cancers.

X-rays are also a powerful and useful diagnostic tool, letting us see inside the tooth and gums so problems can be identified and solved sooner rather than later. But as even Spider-Man (no stranger to radiation!) knows, “with great power there must also come – great responsibility.”

One way we show that we take that responsibility seriously is by taking imaging only when needed to properly evaluate dental situations. This is why, for instance, a dentist insists on a full mouth series of x-rays for any new patient – either taken there at the office or provided by another dentist if a recent set is available. But they should never be “routine” – taken just because a calendar says so. A biological dentist will request them only when they’re needed to provide specific treatment. 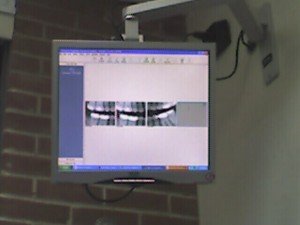 Another way we keep you safe is by using digital x-rays instead of conventional film. Some studies have suggested that digital reduces radiation exposure by as much as 90%!

There are other benefits to going digital, as well. For one, they’re much more comfortable for you, the patient – no more biting down on hard film packets! You also don’t have to sit around waiting for the images to be developed. We can see them right away and immediately retake any that don’t turn out.

This also means we no longer have to keep harsh chemicals around for developing film – a difference especially appreciated by our patients with chemical sensitivities!

Ultimately, digital images tend to be better quality than those taken on film. We can also enlarge, brighten and otherwise clarify them so we can get the best view of the state of your teeth, gums and bone. Consequently, it’s easier to catch problems in very early stages, before they become bigger – and more expensive – issues.