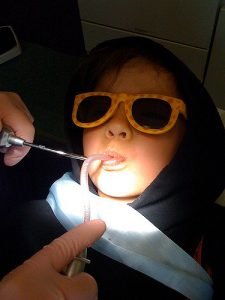 Placed well, sealants can help prevent cavities. On the surface then, it would appear the ADA’s recent “scientific” endorsement “BPA in dental sealants safe” makes sense. But it doesn’t.

Of the 12 sealants tested by the ADA’s Professional Product Review, all exposed children to BPA. But clearly that wasn’t a safety deal breaker. The ADA stands behind this industry research, insisting that

a 6-year old child is exposed to more BPA from food, drinks, sunscreen, shampoo, body wash and other cosmetics; and air and thermal paper, such as cash receipts, than from the amount that is in dental sealants.

The implication is that this makes exposure to BPA from dental sealants okay. It’s not.

As biological dentists, we know deeply the importance of using biocompatible dental materials. While there are some sealants that are BPA-free, many common materials aren’t. And that risk of BPA exposure is one we take seriously.

For one, it’s an endocrine disruptor. According to an independent scientific review in Endocrine Reviews,

It can stimulate rapid cellular responses at very low concentrations. According to a review on BPA, altered body weight, altered organization of the mammary gland, and cancers of the mammary gland and prostate; More than 40 of these studies examined doses less than the RfD (a reference dose). Many of these end points are in areas of current concern for human epidemiological trends. Indeed, it has been suggested that exposure to xenoestrogens such as BPA during early development may be a major contributing factor to the increased incidence of infertility, genital tract abnormalities, obesity, attention deficit hyperactivity disorder, infertility, and prostate and breast cancer observed in European and U.S. human populations over the last 50 years.

The ADA’s research indicated BPA exposure from sealants at 0.09 ng. That’s a minimal level, to be sure – especially when compared to the EPA established reference dose for exposure at 50,000 ng/kg body weight/day. So what’s the problem?

As the ADA indicates, children are exposed to BPA from multiple sources, making their daily exposure to BPA biocumulative. Each exposure adds up, including their exposure from sealants.

And, according to that paper in Endocrine Reviews, the EPA minimum exposure level for safety, may not provide immunity from BPA’s estrogenic side effects.

More than 150 published studies describe BPA effects in animals exposed to less than 50 mg/kg/day, including altered development of the male and female reproductive tracts, organization of sexually dimorphic circuits in the hypothalamus, onset of estrus cyclicity and earlier puberty.

There is substantial evidence from rodent studies indicating that early-life BPA exposures below the oral reference dose lead to increased susceptibility to mammary and prostate cancer.…BPA maybe anticipated to be a human carcinogen.

Not exactly what we want for our kids.

So while the ADAs scientists are technically right – it is a minimal exposure – the conclusion that sealants containing BPA are therefore safe is indefensible. It’s illogical. It does not follow from their own facts.

If your child’s dentist recommends sealants, ask for BPA-free options. As mentioned, they do exist.