What the Research Says About BPA

What a not-so-long but rather strange trip it’s been…for the chemical Bisphenol A (BPA) with respect to human health.

In 2008, it was thought to be totally safe. In 2010, not so much…until 2012, when it was declared safe for adults but not for children. It was then banned from use in baby bottles and sippy cups.

Two years later, the FDA claims that BPA is A-OK. Again. How can this be?

Before we go on, it’s important to understand just what BPA is, and what it is is a chemical that’s used to make plastics. It’s also a brilliant mimic of estrogen – a hormone we all need to function (yup, men and women alike!). In fact, though it was never used as a drug, BPA originally came into use as a synthetic estrogen.

The thing is, you don’t want to overdo it with estrogen. Too much of the stuff? You’ve got problems. Among the health issues that BPA has been scientifically linked to: heart disease, diabetes, liver problems, hormone development problems in youth, sexual dysfunction in men and some cancers.

Unfortunately, our environment has been increasingly loaded with the stuff from a boundless array of consumer products – from plastic water bottles to carry-out boxes to metal can linings to receipt paper.

BPA is also found in some of the dental resins that are used for composite (tooth-colored) fillings and sealants, a byproduct of ingredients that are deteriorating or a result of manufacture. The American Dental Association apparently finds no real reason for concern.

The utility of composite resin materials for both restoring dental health and preventing caries is well established, while any health risks from their use are not. The ADA fully supports continued research into the safety of BPA; but, based on current evidence, the ADA does not believe there is a basis for health concerns relative to BPA exposure from any dental material.

Even so, some dentists will raise the matter of BPA risks to justify continued use of mercury amalgam. Not only do they completely skirt the issue of amalgam’s well documented dangers, they omit a crucial detail: While each and every amalgam contains 50% mercury, not all composites contain BPA.

That some do is a reminder of why biocompatibility testing and conscientious materials selection so important in biological dentistry: to exclude all potential toxins in support of the patient’s health.

BPA: Toxic or Not?

The FDA’s latest proclamation on the matter comes courtesy of a recent study that numerous scientists at work on a related project have taken issue with. In fact, they say the study was really messed up.

On a conference call the previous summer, officials from the FDA and the National Institutes of Health (NIH) had informed these researchers that the lab where the study was housed was contaminated. As a result, all of the animals—including the supposedly unexposed control group—had been exposed to BPA. The FDA made the case that this didn’t affect the outcome, but their academic counterparts believed it cast serious doubt on the study’s findings. “It’s basic science,” says Gail S. Prins, a professor of physiology at the University of Illinois at Chicago, who was on the call. “If your controls are contaminated, you’ve got a failed experiment and the data should be discarded. I’m baffled that any journal would even publish this.”

Yet the FDA study glossed over this detail, which was buried near the end of the paper. Prins and her colleagues also complain that the paper omitted key information—including the fact that some of them had found dramatic effects in the same group of animals. “The way the FDA presented its findings is so disingenuous,” says one scientist, who works closely with the agency. “It borders on scientific misconduct.”

Meantime, other papers published around the same time suggest caution remains the right tack to take.

Additionally, a study in PLoS ONE offered some evidence of childhood heart disorders as a result of maternal exposure to BPA. Earlier research showed that lambs exposed to BPA in utero were born with inflamed fat tissue and later tended toward obesity and poor metabolism.

Especially considering that there are plenty of alternatives available – for instance, stainless steel, glass – the evidence to date gives plenty of reason to minimize your exposure. A few guides to finding healthy alternatives: 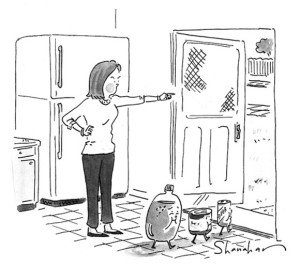 As for plastics? Your best bet may be to avoid them as much as possible, particularly when food is involved, for unfortunately, “BPA-free” doesn’t necessarily mean “healthy.” Evidence has begun to emerge that some of the replacements may be just as bad or even worse. Recent research from the Center for Environmental Health found some plastic sippy cups “had significant amounts of estrogen-like activity, while [most] of those cups had higher activity levels than those made with BPA.”

You can read much more about this research and the quest for BPA replacements here and here.

“Until we have some idea of what chemicals are added in all stages in making a final product, we will not be able to determine the safety of any plastic product….” For now, sticking to leach-free materials like glass or stainless steel as much as possible seems to be your best bet.