What Kind of a Difference Can Tongue-/Lip-Tie Release Make?

Pop dental quiz: What is a frenulum?

If you said the thin bit of skin that connects your tongue to the floor of your mouth or your lips to the gums, you are correct. Sadly, we have no prize to give you, though you’re free to claim all the bragging rights you want. 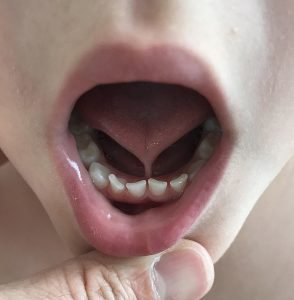 Sometimes a frenulum can be a little bit short, restricting movement of the tongue or lips. The condition is called ankyloglossia, but it’s more commonly known as tongue-tie or lip-tie, depending on which frenulum is short. It’s fairly common, and in some people, it causes no real trouble. In other cases, though, it can – from difficulty in breastfeeding or eating to speech impediments and more, which can have long-term consequences.

On the plus side, it’s a problem that’s easily corrected with a simple laser procedure called a frenectomy, or tongue/lip-tie release. In the office, we snip the frenulum. You’re also given a set of special exercises for your child to do at home to reduce the risk of reattachment. (While frenectomy is most commonly done on children, it can be done to correct tongue- or lip-tie in adults, as well.)

What kind of improvements can you expect?

That was the focus of a study published last spring in Clinical Pediatrics. It involved nearly 40 children between the ages of 13 months and 12 years – kids who had tongue-tie and troubles with speech, feeding, and sleep. Each underwent a laser frenectomy followed by myofunctional exercises and were evaluated via questionnaires at 1 week and 1 month after treatment.

Nearly all showed improvement, according to their parents’ reports. Speech improved in 89% of the children, while solid feeding and sleep each improved in 83%.

More, half of the children with speech delays said new words after the procedure. Three-quarters of slow eaters ate more quickly. Just over 70% of restless sleepers slept more soundly than before the procedure.

“After tongue-tie releases paired with exercises,” concluded the study authors,

most children experience functional improvements in speech, feeding, and sleep. Providers should screen for oral restrictions in children and refer for treatment when functions are impaired.

And indeed, these are the kinds of improvements we hear about from families in our Arlington practice after this simple but transformative procedure. If you suspect that tongue- or lip-tie might be a problem for your own child – or yourself! – we encourage you to contact us today to learn more about how we can help.