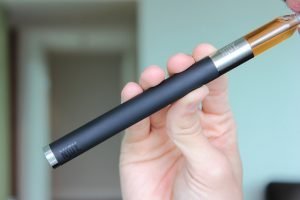 In a way, vaping is kind of like mercury amalgam: Despite those who insist that it’s safe, it’s not.

It’s certainly not any safer or healthier than smoking. While many believe it can help a person quit smoking, the evidence suggests that it actually encourages it, especially in teens (who also happen to be much more likely to vape than smoke, by the way).

And like smoking, vaping also does a number on oral and systemic health alike.

Let’s look at the marketing. Here in the US, e-cigarettes are currently advertised differently than regular cigarettes and tobacco.

Unlike tobacco products, e-cigarettes can be advertised on both TV and the radio in the United States. In some states, e-cig makers can even sell their products to minors. E-cigarettes don’t contain tobacco, but they usually do deliver hits of nicotine. That’s the chemical in tobacco that makes smoking addictive.

But things are set to change in a couple years. Still, for now, e-cigarettes aren’t included in the FDA’s ban on cigarette and tobacco broadcast ads.

Flavors for these e-cigs (oh look, they have a cool name, too!) include everything from watermelon and mint to Strawberrylicious and Peach Pit. A simple online search results in hundreds flavors that could be commonly mistaken as candy flavors. Not only can this be seen as targeting the youth market, websites commonly refer to them as “juices.”

Regulations of vaping are still in their infancy. Only last year did the FDA say it would start regulating e-cigs, along with other unconventional tobacco products. But that doesn’t go into effect until 2018.

Until that time, the nearly 500 brands and 7,700 flavors of e-cigarettes will remain on the market – before FDA is able to fully evaluate them.

And the upshot? “We don’t presently know what is in e-cigarettes,” as the American Lung Association puts it, just nicotine and “other chemicals.”

That alone should give reason to pause. But the research to date gives even more reason.

For instance, recent research out of Johns Hopkins adds to the evidence that toxic heavy metals are commonly inhaled along with the vapor.

In an examination of five e-cigarette brands’ first-generation devices, researchers found varying levels of cadmium, chromium, lead, manganese, and nickel in the liquid component that, when heated, delivers ingredients such as nicotine and flavors to the user. Researchers believe the main source of the metals — which can be toxic or carcinogenic when inhaled — is the coil that heats the liquid to create the aerosol, which is commonly (but erroneously) referred to as vapor. [emphasis added]

The “juices,” meantime, typically include propylene glycol and vegetable glycerin, along with nicotine and mystery flavoring. Although the FDA approves of propylene glycol as a food additive, it’s also found in products such as aircraft de-icing fluid and antifreeze.

There’s also evidence that vaping is cytotoxic – that is, poisonous to cells. A study published last year in Oral Oncology found that it also does genetic damage, as well.

E-cigarette vapor, both with and without nicotine, is cytotoxic to epithelial cell lines and is a DNA strand break-inducing agent. Further assessment of the potential carcinogenic effects of e-cigarette vapor is urgently needed.

And just like smoking, vaping can wreck your gums. In fact, recent research suggests e-cigarettes may be even more damaging to the cells in your mouth than regular cigarettes.

Clearly, vaping is no safe alternative. The only safe alternative is to avoid nicotine products all together. And if you’ve already started but are ready to quit, here are some great tips to get you started.