The picture of a smiling child who has lost several baby teeth is adorable.

No one says, “Oh, look at those dimples!” anymore or ask how much money you got from the tooth fairy.

But tooth loss doesn’t have to be a sign of getting older.

Whether you chew or smoke, tobacco upsets the balance of healthy bacteria within your mouth. That’s right: Tobacco alienates your body from its own natural bacteria, leaving you vulnerable to outside attackers. The bacteria naturally found in your mouth help battle the microbes that colonize on your teeth to form the biofilm more commonly known as “plaque.”

But that’s the least of your worries. You’re also more vulnerable to the pathogens (“bad bugs”) that cause periodontal (gum) disease. That can take you anywhere from inflamed gums to total tooth loss.

And your tobacco-triggered troubles probably won’t stop at just one tooth. The whole mouth is affected, making it a breeding ground for disease that weakens the bone and gums. This is in addition to all the other damage it does to your body. As a JADA study from earlier this year noted, 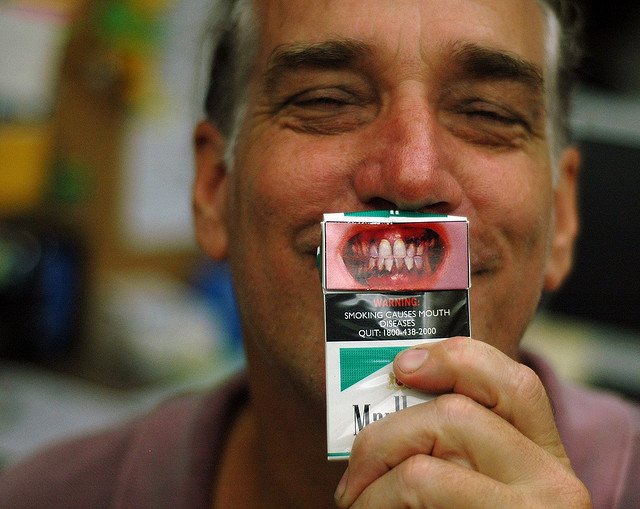 Yet we’re still supposed to think smoking is as cool and fun and sexy as shown in the ads? If you think pictures of smokers’ diseased hearts and lungs and yellow teeth aren’t enough of a turn-off, just imagine trying to introduce yourself to someone without showing your teeth!

More, the older you are and the longer you smoke quickens the downward slope towards tooth loss. One study from earlier this year also found the risk of tooth loss may differ according to biological sex:

“Regardless of having better oral health practices, such as brushing and flossing, and visiting the dentist more frequently, postmenopausal women in general tend to experience more tooth loss than men of the same age,” says Xiaodan (pronounced Shee-ao-dan) Mai, a doctoral student in epidemiology in the UB Department of Social and Preventive Medicine in the School of Public Health and Health Professions. “We were interested in smoking as a variable that might be important.”

In the UB study, heavy smokers – defined as those who had at least 26 pack-years of smoking, or the equivalent of having smoked a pack a day for 26 years – were nearly twice as likely to report having experienced tooth loss overall and more than six times as likely to have experienced tooth loss due to periodontal disease, compared to those who never smoked. [emphasis added]

Be that as it may, both men and women can benefit from working to restore the oral health they had before they started using tobacco.

What you put into your body plays a strong role in determining your oral and overall health. A couple of years ago, Ohio State researchers analyzed 22 participants, a mix of current smokers and recent quitters. They found “decreased levels in various bacterial pathogens and an increase in health-associated species in those patients who no longer smoked.”

The biggest decision that you can make towards optimal oral health is to never start using tobacco – or quit now. In fact, quitting is often a necessary first step before getting any kind of periodontal care to help save as many of your teeth as possible. There are more than a few dentists who will turn away patients until they quit their tobacco use. For no matter well you clean a smoker’s mouth, it will always be one step forward, two steps back until the patient gives up tobacco.

Otherwise, it’s like trying to rebuild a burnt-out house while it’s still on fire.