To Kick the Sugar Habit

People – such as this fellow – often point a finger at fast food and other take-out meals as the reason obesity rates have soared. It can be tasty, but it tends toward junkiness: huge portions of too-salty, too-fatty, too-caloric, too-sugary grub. And of course it does play a role – not just in obesity but a vast array of health problems, from increased risk of heart disease and cancer to gum disease and tooth decay.

But fast food may be the least of the trouble. 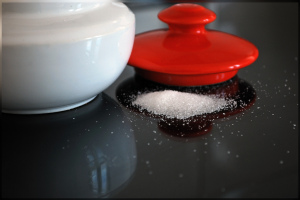 It turns out that the vast majority of added sugars we eat do not come from restaurants – less than 20%, in fact.

As much as 76% actually come from what we buy at the grocery store – this, according to a large study published earlier this year in the American Journal of Clinical Nutrition.

The researchers also found that about 14% of all calories come from sugar, with soda and other soft drinks (e.g., energy and sports drinks, flavored sweetened teas) being the greatest source, followed by grain desserts, fruit drinks, candy and dairy desserts.

The World Health Organization recommends that an adult get no more than 5% of their daily intake from sugar – and not just added sugars, but all sugars, even those naturally occurring.

To put it into perspective, that’s a little more than half a 12 ounce can of Coca Cola.

More recent research suggests we must consume far less – no more than 3% of our daily calories – to prevent tooth decay.

Considering all that sugar – and the role it plays in chronic inflammation – it’s no wonder we’ve seen rates of preventable chronic disease rise over recent years. Not only are we eating too much of what fuels inflammation, that sugar too often displaces healthier, nutrient dense foods such as vegetables, lean proteins, legumes, whole grains and the like.

We get too much of what our bodies don’t need and not near enough of what they do.

And when that happens, we’re the worse for it.

Yet we can be mightily resistant to quitting the stuff. After all, it tastes good – and makes other things taste good. We are, it seems, hard-wired to be drawn to the stuff.

Also, our foodways don’t spring from just anywhere. There are social and cultural elements to our eating. We all have traditional foods of some sort that we grew up with and wish to go on eating, regardless of their healthfulness or lack thereof.

So it’s no big surprise that when it comes to oral health, our ideas about how to prevent problems can be a little muddled – a matter nicely pointed out in a recent editorial by British Dental Journal Editor-in-Chief Stephen Hancocks:

It is…intriguing how when one asks a patient what causes tooth decay they answer ‘sugar’ but when asked how to prevent it they respond ‘by brushing your teeth’. Confusingly there is merit in this,…but the more logical answer would be to reduce or eliminate sugar.

It may be hard to believe until you actually do it yourself, as this blogger did with her family, but quitting sugar is not impossible. And that sugar is replaced with something far more valuable: renewed vitality.

It was subtle, but noticeable; the longer I went on eating without added sugar, the better and more energetic I felt. If I doubted the connection, something happened next which would prove it to me: my husband’s birthday.

During our year of no sugar, one of the rules was that, as a family, we could have one actual sugar-containing dessert per month; if it was your birthday, you got to choose the dessert. By the time September rolled around we noticed our palates starting to change, and slowly, we began enjoying our monthly “treat” less and less.

But when we ate the decadent multi-layered banana cream pie my husband had requested for his birthday celebration, I knew something new was happening. Not only did I not enjoy my slice of pie, I couldn’t even finish it. It tasted sickly sweet to my now sensitive palate; it actually made my teeth hurt. My head began to pound and my heart began to race; I felt awful.

It took a good hour lying on the couch holding my head before I began to recover. “Geez,” I thought, “has sugar always made me feel bad; but because it was everywhere, I just never noticed it before?”

After our year of no sugar ended, I went back and counted the absences my kids had in school and compared them to those of previous years. The difference was dramatic. My older daughter, Greta, went from missing 15 days the year before to missing only two.

Now that our year of no sugar is over, we’ll occasionally indulge, but the way we eat it is very different. We appreciate sugar in drastically smaller amounts, avoid it in everyday foods (that it shouldn’t be in, in the first place), and save dessert for truly special occasions. My body seems to be thanking me for it.

How to do it? Well, rather than reinvent the wheel, we’ll just point you to a few of our favorite tip sheets to get you started.

Have you kicked the sugar habit? Share your story in the comments! What did you experience? Any tips you care to offer?