A little over a year ago, a new federal law banned the sale of most flavored vape products, in hopes of making vaping less appealing to kids and teens. Menthol and tobacco flavored pods were exempted from the rule. 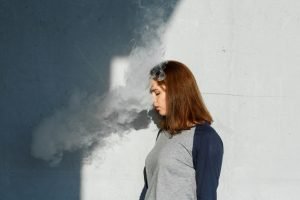 But so were other ways of delivering the sweet and fruity flavors that have been so popular with kids. Open tank containers and e-liquids not in pod form are a-ok. So are flavored disposable e-cigarettes.

“I think it’s a joke to call it a vaping ban at all,” American Lung Association spokesperson Erika Sward told the Washington Post.

But the trouble with flavored vape products isn’t restricted to their popularity with youth. A new study in Frontiers in Physiology suggests yet another way in which they may harm oral health in particular. (For more on how vaping affects oral and whole body health alike, see our previous posts here and here.)

“Since the oral cavity is the first anatomical site to be assaulted by ECIG [electronic cigarette] aerosol,” note the authors,

Commensal bacteria are those that are part of the normal community of microbes that live in a person’s mouth. When their growth and the overall makeup of the community are disturbed, the lack of balance becomes an opportunity for pathogens (“bad bugs”) to take over. A healthy mouth gets harder to maintain.

So to see the effect of flavored vape on the oral microbiome, the researchers exposed samples of four common strep strains (S. gordonii, S. intermedius, S. mitis, and S. oralis) under two different types of test. One test found that bacterial growth was hampered when exposed to 100% menthol, cinnamon, or strawberry e-liquid, although there was no effect when exposed to a dilution (5% flavor).

For the other, bacterial samples were exposed to either 100 puffs of flavored vapor generated by an e-cigarette or an equivalent amount of flavored e-liquid. Again, they found that growth was inhibited, and the greater the dose, the greater the effect. The same three flavors – menthol, cinnamon, and strawberry – proved most problematic.

In both cases, all strains of bacteria were affected.

Earlier research has shown that this “destabilization” of the oral microbiome, the authors note, paves the way for gum disease and tooth decay alike. It’s also shown that two of the strains they used, S. gordonii and S. intermedius, may in fact protect against gum disease. “Oral disease,” in turn,

serves as both a contributor to and predictor of poor systemic health that disseminates beyond the oral cavity and can have lifelong impact on human health and physiology.

Indeed, it can. And does.