The Next Frontier of Biocompatible Dentistry

Dentistry can repair teeth that are broken or badly decayed. It can replace teeth that are lost. But what if we could actually regenerate those damaged tissues instead?

That’s the hope and promise of dental stem cell research. Though we’re a long way off from being able to actually spur the growth of new teeth, there’s been a lot of great progress toward innovative new therapies in what’s known as regenerative dentistry.

One recent study, for instance, suggests that one particular group of stem cell could be used to regenerate the pulpo-dentinal complex – the living tissue within a tooth and the layer of dentin surrounding it.

For the study, published this past April in Science Advances, scientists used 3D cell culture systems to identify “a group of unique multipotent stem cells…called multipotent dental pulp regenerative stem cells,” which were harvested from mice.

In detailing the nature of these cells, the authors noted that they may one day serve as an “excellent” alternative for treating pulpitis and pulp necrosis. These common diseases are caused by deep infection or trauma, including excessive treatment of the tooth. They’re also tough to treat successfully. Often, the end result is a root canal – or simply a dead tooth.

After all, the pulp

plays a central role in regulating the critical vitality of a tooth, including induction of dentin formation, maintaining nutritional supply, and providing the sensational neural network that responds to external stimuli. 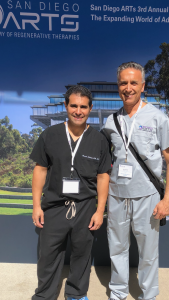 Dr. Attar with a colleague at the San Diego Academy of Regenerative Therapies.

If the pulp dies, the tooth dies. Obviously, you want to keep that pulp – and the dentin and enamel that encase it – viable for as long as possible.

And pulp regeneration is hardly the only game-changing use of stem cells in dentistry. Research suggests that they may also be used to repair periodontal tissues, grow new bone, and one day even grow new teeth. They may also be used to support faster wound healing and treatment of conditions such as oral ulcers. Stem cells from non-dental sites may one day help implants integrate better with the bone in which they’re placed.

Obviously, a great deal of research remains to be done, but the potential benefits to patients are exciting to consider!

And it’s one reason why Dr. Attar has been learning about advanced stem cell therapies at the San Diego Academy of Regenerative Therapies, with applications from tissue repair to cosmetic enhancements. It’s the next frontier of biocompatible dentistry.