The Meridian System: A Map to the Body

It might seem strange to say that there are profound links between the state of your teeth and gums and your overall health. Once you stop and think about it, though, it makes perfect sense. After all, you are not teeth-plus-the-rest-of-you but a single, unified whole. Your teeth are connected to the rest of your body, physically and energetically.

Because of this, local problems don’t necessarily stay local. For instance, recent research has detected periodontal bacteria in the affected joints of those with rheumatoid arthritis, near the hearts of those with cardiovascular disease. Bacterial and other toxins found in root canal teeth may similarly travel and wreak havoc, according to Dr. Joseph Issels, Dr. Hal Huggins and many other researchers.

These physical effects have an energetic component, as well. 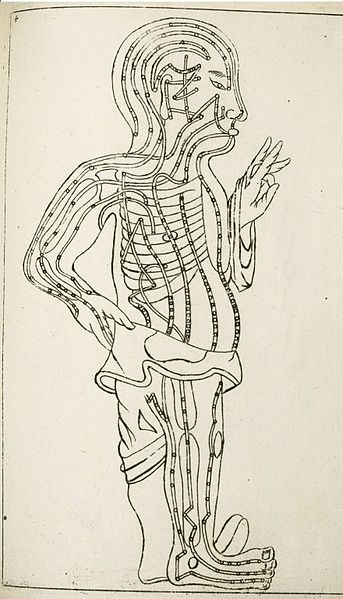 About 5000 years ago, the Chinese identified what we now know as the meridian system: a series of channels running throughout the body along which energy – or qi (chi) – flows.

Meridians pass through the body along 14 tangible channels carrying energy into and affecting every organ and every physiological system, including the immune, nervous, endocrine, circulatory, respiratory, digestive, skeletal (including teeth), muscular, and lymphatic systems.

Centuries later, a German dentist named Fritz Kramer thoroughly mapped out the specific energetic relationships between the teeth and organs – work that was essential to the continued development of biological dental medicine through the last half of the 20th century.

Pop quiz!
Which teeth are linked to your heart through their meridians?

More recent research has powerfully confirmed the existence of these energy pathways. In a 2008 paper for Alternative Therapies, David Feinstein and Donna Eden cite some especially eye-opening work:

A study published in the Proceedings of the National Academy of Sciences in 1998 using functional magnetic resonance imaging (fMRI) demonstrated that stimulating an acupuncture point in the toe (each acupuncture point is believed to sit on the line of and regulate the energy in a particular meridian) activated the exact areas of the brain that would be predicted by acupuncture theory, despite no known anatomical pathways connecting the toe to that brain region. A special camera that registers biophotons in the spectral range of 200-800 nm shows that when stimulated, the meridians generate light along channels that are identical to the descriptions of meridians found in the texts of traditional Chinese medicine.

So what does this mean, practically speaking? 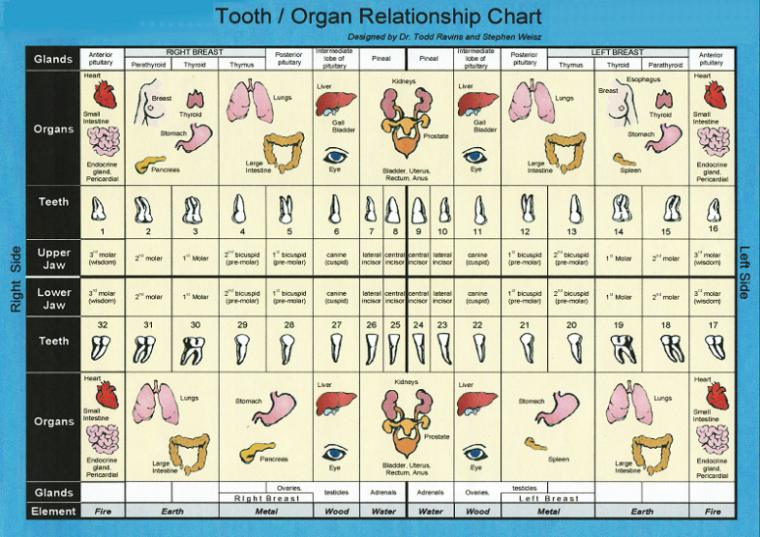 Consider your upper first incisors – the two teeth right there in the front of your smile. Other organs sharing their meridian include the kidneys, bladder and frontal sinus. Kidney stones or related renal issues may indicate problems brewing with the first incisors. Similarly, a decaying first incisor may be prelude to kidney problems.

In other words, if you’re experiencing a problem in one area, it’s worthwhile to look into what else may be happening along that same energetic channel.

While acupuncture and other therapies of Traditional Chinese Medicine may be excellent for dealing with disruptions and blockages, it’s important to know that their effects may be short term if the actual cause of the problem is not dealt with, too. For instance, if mercury amalgam fillings – a very common disruptor – prove to be the cause, safe removal and biocompatible replacement may be needed to promote long-term healing. (Of course, there’s the overall toxicity issue, as well…)

Simply, therapies can get your qi flowing smoothly again, but if the conditions that gummed things up are left untreated, you can expect things to get gummed up again, too.

To learn more about the specific relationships between teeth and organs – check out this Interactive Tooth Meridian Chart. While the chart cannot and should not be used to make any kind of diagnosis, it can give you a better appreciation of the relationships between your teeth and the rest of your body. (It will also give you the answer to the pop quiz given above!)