The Curious Case of the Missing Nutrients

Last year, Post and General Mills responded to public concerns about GMOs and announced they would no longer use genetically modified ingredients in two, count ‘em, two products.

Last month, NPR followed up on the story and the curious case of the missing nutrients in GMO-free Cheerios and Grape-Nuts.

When they actually arrived on supermarket shelves,…there was a mysterious change in their list of ingredients. Four vitamins that previously had been added to Grape-Nuts — vitamins A, D, B-12 and B-2 (also known as riboflavin) — were gone. Riboflavin vanished from Cheerios. 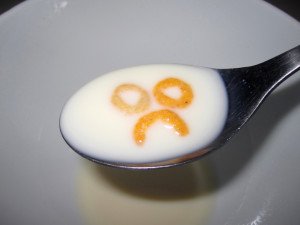 This all should raise another question: Why do nutrients need to be added to packaged food products in the first place?

For one, it can help move product. The appearance of healthfulness – “Enriched with 10 essential vitamins and minerals!” – sells.

But there’s more to it than that. Nutrient loss is part of the equation when it comes to the industrial manufacture of food. Replacing those lost nutrients can make a product seem more healthful or wholesome – whether it is or not.

For a food product isn’t necessarily the same thing as food – at least when it comes to industrially processed products. Take Cheerios, for instance, which Marion Nestle has aptly described as “essentially a vitamin pill wrapped in rapidly absorbable starch.”

Everything else is added vitamins.

This is a pretty simple, straightforward product, though – especially in comparison to others, so commonly hopped up with extra sugars (sometimes several different kinds), salt, chemical preservatives, artificial colors, flavors and other additives. Our bodies simply were not designed to consume such things.

For more on nutrition and processed versus whole foods, including making more healthful choices among processed products, check out the two videos below: