Spicing Up Your Diet May Decrease Inflammation 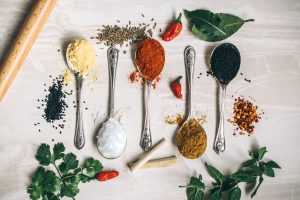 Having healthy teeth and gums starts with eating a healthy diet – heavy on the veg, proteins, and good fats, light on added sugars and other refined carbs that fuel inflammation. But what about reducing inflammation – that hallmark of gum disease? A recent study in the Journal of Nutrition suggests that adding an array of spices to your meals may help.

While lots of studies have already shown the anti-inflammatory effects of individual spices, most meals and recipes call for more than one. What kind of effect would a blend of spices have?

First, researchers created a blend of some of the most commonly used spices in the US: basil, bay leaf, black pepper, cinnamon, coriander, cumin, ginger, oregano, parsley, red pepper, rosemary, thyme, and turmeric. Twelve participants were recruited – all nonsmoking men between the ages of 40 and 65, who were either overweight or obese and had at least one risk factor for cardiovascular disease.

Randomly, on three different days, each participant ate a meal high in saturated fat and refined carbs: coconut chicken curry, a corn muffin, and a cinnamon biscuit. One meal had 2 grams of the spice blend, one had 6 grams, and one had no spices at all. The men’s blood was tested for inflammatory markers before each meal and then hourly for 4 hours after the meal.

Eating the high spice meal resulted in lower inflammation markers compared to eating the other two versions of the meal.

This is even more significant considering the meal participants ate wasn’t exactly a healthy one. It was a meal that would normally trigger acute inflammation. It was also a realistic one. As lead author Dr. Connie Rogers explained in a news release,

Ultimately the gold standard would be to get people eating more healthfully and to lose weight and exercise, but those behavioral changes are difficult and take time. So in the interim, we wanted to explore whether a combination of spices that people are already familiar with and could fit in a single meal could have a positive effect. 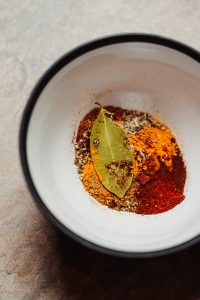 Basically, this is the nutritional version of baby steps.

Granted, the study was small. Rogers and her colleagues plan to look into the impact spices have on people’s diets across longer periods of time and within a more diverse population.

Should this inspire you to spice up your own meals, be sure to opt for certified organic spices as often as possible. Such spices are sterilized by steam only, not fumigation or irradiation (the latter of which has actually been shown to deplete nutrients in some spices).

Yes, it can be a little more expensive, but when it comes to spicing up your life, a little goes a very long way!