Sleep Like Your Health Depends on It (Because It Does) 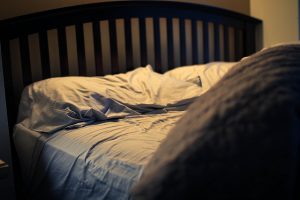 A recent article over at CNN offers a good reminder that running a sleep debt can have far greater effects than daytime sleepiness and general grouchiness.

It can mean more accidents due to weakened reflexes and an unfocused mind. It can mean weight gain. It can mean a higher risk of depression, anxiety, diabetes, heart disease – in general, a shorter, unhealthier life span.

Recent research has also supported the suspected link between Alzheimer’s and sleep loss. A study in Brain, for instance, found that when sleep is constantly interrupted – as in cases of obstructive sleep apnea (OSA) – more of the proteins suspected to cause Alzheimer’s build up in the brain. (Normal sleep helps clear them.)

What’s more, research in the Annals of the American Thoracic Society found that those who are genetically susceptible to Alzheimer’s appear to be at greater risk of the cognitive decline that OSA and other forms of sleep disordered breathing can contribute to.

Many don’t realize that dentists are in a unique position to help identify sleep breathing problems and even, in mild to moderate cases, offer solutions that can enhance both oral and systemic health. Many signs of OSA can show up in the mouth, from inflamed tonsils to scalloping along the tongue, from tooth wear from bruxing (grinding the teeth during sleep) to headaches and other TMJ symptoms. If exam findings suggest OSA, a sleep test may be recommended for diagnosis.

Dental options for treating apnea provide welcome alternatives to CPAP. Most often, dental treatment involves appliance therapy – comfortable devices that typically keep the airway open by gently pulling the lower jaw forward. On the whole, research suggests that oral appliance therapy (OAT) can be at least as effective as CPAP, yet much more comfortable and well-tolerated.

We may also recommend diet, activity, and other lifestyle changes to support improved sleep, as well as additional therapies such as acupuncture or chiropractic care. As ever, everything depends on the individual and the specific causes of their symptoms. After all, it’s causes we want to address.

While tending to symptoms can bring short term relief, only attention to causes can bring about good long-term results.

Many people don’t even realize the impacts a little lack of sleep can cause. We all know those who like to brag of only getting four to six hours of sleep a night, almost like it’s a competition. Yet according to a 2003 paper in Sleep, such folks are likely unaware of what they’re losing in the course of gaining those extra waking hours.

Since chronic restriction of sleep to 6 h or less per night produced cognitive performance deficits equivalent to up to 2 nights of total sleep deprivation, it appears that even relatively moderate sleep restriction can seriously impair waking neurobehavioral functions in healthy adults. Sleepiness ratings suggest that subjects were largely unaware of these increasing cognitive deficits, which may explain why the impact of chronic sleep restriction on waking cognitive functions is often assumed to be benign.

For the sake of your health, happiness, and those around you, it is worth a quick conversation with your dentist to identify warning signs or offer suggestions for improving your sleep. And if dental factors aren’t at the root of your running a sleep debt, here are some great tips from Harvard Medical School on getting a better night’s sleep.