Sleep Apnea: Not Just Some Annoyance 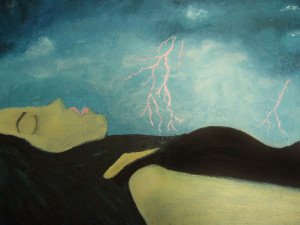 Sleep apnea isn’t just some annoyance. It can be life-threatening. Literally. But is it associated with cancer?

Earlier research had suggested that intermittently limiting oxygen intake – as happens repeatedly through the night for those with sleep apnea – encouraged abnormal cell growth. New research from Canada, however, suggests that there is, in fact, no relation.

The scientists analyzed 6 years of health data from more than 10,000 people with sleep apnea.

At the start of the study, about 5 percent of the patients had cancer. Over an average of nearly eight years of follow-up, an additional 6.5 percent of the participants developed cancer. Most common were prostate, breast, colorectal and lung cancers, the researchers said.

The findings were published last week in the Canadian Medical Association Journal.

But while there may be no cancer connection, sleep apnea still plays a role in many other health issues. On the milder side, there are things like fatigue, headaches, sexual dysfunction and depression.

But research has shown it to be link to a number of quite serious health problems, as well – cardiovascular disease, for instance. Data from the National Commission on Sleep Disorders Research shows that 38,000 deaths each year

relate to cardiovascular problems that in one way or another are connected to sleep apnea. These problems include high blood pressure, hypertension and stroke, among others.

Sleep apnea can affect anyone at any age, with similar effects. A study published this month in the Journal of Behavioral Sleep Medicine found that 13% children studied had signs of obstructive sleep apnea and ADHD or another behavioral disorder. A slightly earlier study looked at the connections between blood pressure, white matter change (WMC), and sleep apnea.

As for cancer, although no link was found, some experts note that sleep apnea can make the going tougher for a cancer patient. As Dr. Yosef Krespi, director of the Center for Sleep Disorders at Lenox Hill Hospital in New York City recently told HealthDay,

The quality of life of sleep apnea patients with cancer and their ability to tolerate treatments such as chemotherapy and radiation can be very different than those without the condition.

It may even make healing tougher. For sleep, as we’ve seen, isn’t just about getting a break. It helps your body strengthen, regroup, and recover. A habitual lack of it, science is finding, can mean chronic health problems down the line.

If you suspect that you or a family member suffer from sleep apnea, seek treatment soon. Each case is different, so make sure to talk to your dentist about your individual needs. There are options beyond CPAP…