Sleep Apnea Could Really Be Stressing You Out! 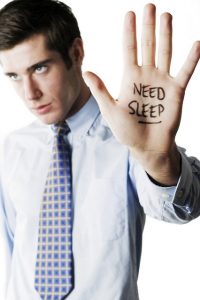 Inhale, then exhale, but don’t inhale right away. Count out 10 seconds until your next breath.

Take that breath. How do you feel?

Relieved, probably. Maybe you even noticed the tension releasing from your whole body as you inhaled again.

Now imagine experiencing that over and again through your night’s sleep. That’s a bit of what obstructive sleep apnea (OSA) is like. Not getting the oxygen it needs to survive, the body perceives a threat and reacts accordingly. You wake with a gasp, taking in as much air as you can.

Then you go back to sleep only to wake once the airway is again blocked – by excess tissue around the top of the windpipe, for instance, or the tongue or lower jaw slipping backwards.

New research in the Journal of Clinical Endocrinology & Metabolism shows just what an impact this has on the body as it sleeps.

Now, most studies on OSA collect data during the day, when patients are awake. But

“This is one of the first studies to show real-time effects of sleep apnea on metabolism during the night,” says Jonathan Jun, M.D., assistant professor of medicine at the Johns Hopkins University School of Medicine and the paper’s senior author.

Jun and his team collected a range of metabolic data from patients while they slept both with and without CPAP – the usual treatment for OSA symptoms, which uses continuous positive airway pressure to keep the airway open. They measured free fatty acids in the blood, glucose, insulin, and the stress hormone cortisol. They measured brain waves, blood oxygen levels, heart rates, and eye and leg movements.

Jun and colleagues found that CPAP withdrawal caused recurrence of OSA associated with sleep disruption, elevated heart rate and reduced blood oxygen. CPAP withdrawal also increased levels of free fatty acids, glucose, cortisol and blood pressure during sleep. The more severe the OSA, the more these parameters increased. In addition, glucose increased the most in patients with diabetes. Increases in fatty acids, glucose and cortisol have all been linked to diabetes. The Johns Hopkins team also found that blood pressure increased and the arteries showed signs of stiffness in the morning without CPAP. Over time, increased blood pressure and vascular stiffness can contribute to cardiovascular disease.

That’s the very picture of a body under stress. It also suggests that OSA may be more than just a manifestation of obesity and related health issues. It may actually aggravate them.

CPAP is hardly the only solution, though – and it’s a good thing, too. Many people find reasons to quit it. Compliance rates are notoriously low. But there are other effective options for dealing with mild to moderate sleep apnea – from lifestyle changes to oral appliance therapy.

In fact, according to the most recent American College of Physicians guidelines for managing sleep apnea, the first recommendation is to encourage overweight and obese OSA patients to lose weight. Other research suggests that exercise can likewise have a big impact on at least some OSA symptoms.

And these, of course, can be pursued in tandem with oral appliance therapy, in which custom appliances are used to keep the tongue from blocking the airway or gently repositioning the lower jaw to keep the airway free and clear.

One 2016 study found that airflow may be greatly improved by appliance therapy.

OSA is much more common today than just a couple decades ago. According to one study, between 1993 and 2010, OSA diagnoses jumped 14.6-fold! But many more treatment options and tools have been developed during that same period – and continue to be developed – offering options beyond CPAP.

And you just might find some of those options in your dentist’s office.