Globally, 40% of children and more than 30% of nonsmokers are exposed to secondhand smoke. Each has a heightened risk of asthma, cancer, heart disease, respiratory infections and other chronic illnesses – all as a consequence of other people’s choices. 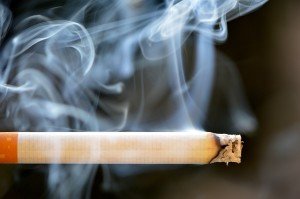 Maybe you already knew that. But here’s something you may not know: Children routinely exposed to secondhand smoke seem to also have a higher risk of tooth decay.

The most recent study to document this association was published last month in the BMJ, which involved analysis of the records of almost 77,000 Japanese infants and toddlers. The authors found that those who were exposed to secondhand smoke at the age of 4 months were 1.5 times more likely to develop decay as they grew.

Children with family members who smoked had significantly more decayed, missing, or filled (DMF) teeth than those with no smokers in the family, according to the study. The mean DMF index at 18 months was 0.03 with no family members who smoked and 0.11 (p < 0.01) with infants exposed to tobacco smoke at age 4 months. At age 3, the mean DMF index was 0.44 for the children with no smokers in the family and 1.07 for those exposed to smoke at age 4 months.

Of course, it’s important to keep in mind that just because two things are associated, it doesn’t mean that one causes the other. Correlation is different from causality. And the authors note some other factors that are common to both oral disease and those children exposed to secondhand smoke:

Children at 4 months old with family members who smoked had their teeth brushed less frequently, [the authors] reported. And while the frequency of eating sweets was similar among the groups, exposure to smoke was associated with higher proportions of bottle feeding and drinking juice every day.

Such things may play a role, as well as the physiological impact of the smoke itself.

Either way, it’s still worth kicking the habit. According to the American Lung Association, more than 24 million kids are exposed to secondhand smoke.

Secondhand smoke is responsible for between 150,000 and 300,000 lower respiratory tract infections in infants and children under 18 months of age, resulting in between 7,500 and 15,000 hospitalizations each year. It also causes 430 sudden infant death syndrome (SIDS) deaths in the U.S. annually.

As with mercury, there is no safe level of exposure. Zero.

If you are – or someone you know is – thinking about quitting, there are lots of resources to help – including natural remedies that may help you kick the habit more easily. You can do it!