It was a little shocking and very gratifying to see the headline in such a major media outlet at the start of this week: 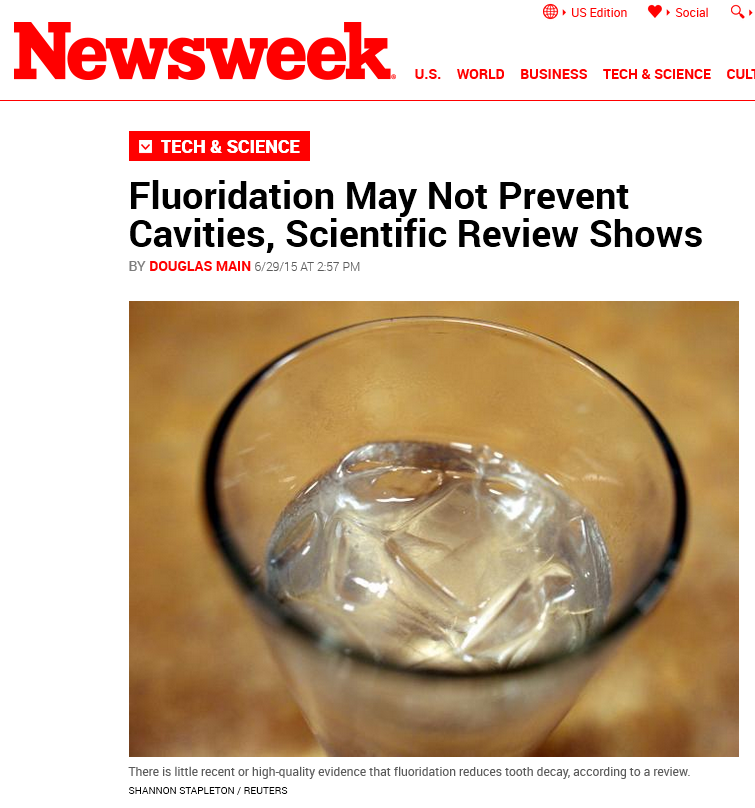 The review in question is the latest from the Cochrane Collaboration, which Newsweek described as “the gold standard of scientific rigor in assessing effectiveness of public health policies.” Cochrane’s Oral Health Group analyzed the data in 155 studies on fluoridation, caries (tooth decay) and fluorosis.

At best, they found some evidence that fluoridation reduces cavities in children – but with some important caveats. As described in the plain language summary of the review,

Although these results indicate that water fluoridation is effective at reducing levels of tooth decay in children’s baby and permanent teeth, the applicability of the results to current lifestyles is unclear because the majority of the studies were conducted before fluoride toothpastes and the other preventative measures were widely used in many communities around the world.

There is very little contemporary evidence, meeting the review’s inclusion criteria, that has evaluated the effectiveness of water fluoridation for the prevention of caries.

The available data come predominantly from studies conducted prior to 1975, and indicate that water fluoridation is effective at reducing caries levels in both deciduous and permanent dentition in children. Our confidence in the size of the effect estimates is limited by the observational nature of the study designs, the high risk of bias within the studies and, importantly, the applicability of the evidence to current lifestyles. [emphasis added]

Despite all this, fluoride remains the only medication added to public water. It’s considered good “prevention.” Yet there are more effective and far less toxic things we can do to prevent caries, starting with good hygiene and healthful, nutrient-dense diets.

For every medication – every health intervention – carries some degree of risk, and when it comes to fluoride, the more we learn about its risks, the more they exceed any theoretical benefit. While the current review didn’t consider the systemic effects of swallowing fluoride, it did consider fluorosis – the mottling of tooth enamel due to excess fluoride exposure.

The researchers calculated that, in areas with a fluoride level of 0.7 ppm in the water, approximately 12% of the people evaluated had fluorosis that could cause concern about their appearance. This increases to 40% when considering fluorosis of any level .

It’s interesting to note that the level mentioned – 0.7 ppm – is the recently revised recommendation of the US Department of Health and Human Services. One of the reasons they lowered the level was concern about too much fluoride in the modern environment. Some of it may be naturally occurring. Most is manufactured – typically byproduct of the phosphate fertilizer industry. It’s available in toothpastes and rinses. You can even find fluoridated floss! Conventional dentistry has its fluoride treatments and supplements, as well.

And then there’s the stuff in water.

Documented health risks from chronic fluoride exposure include thyroid problems and cognitive delays, as well as cardiovascular disease, diabetes and other conditions.

No evidence of benefit, yet good evidence of risk? It’s time to finally and for good “Get the F Out of Texas” and end this practice. We deserve clean, pure water.