Reducing Toxins in the Dental Office

Mercury is the key ingredient in so-called “silver” amalgam fillings and a known neurotoxin. Despite that, about 75% of all new fillings are made of the stuff, as the ADA continues to insist that it’s perfectly safe. Evidence, however, shows that mercury from dental amalgam may play a role in numerous neurological, endocrine and autoimmune disorders.

This isn’t just a concern for patients. Dental workers are at risk, as well. 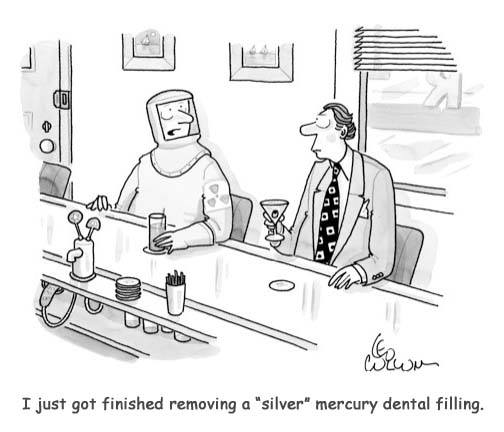 Yes, dentists – who, every day, with every patient, year after year, can be exposed to an incredible variety of toxins, ranging from bacteria and other pathogenic (disease-causing) microbes to x-ray radiation, toxic chemicals and heavy metals.

Due to constant exposures to mercury – as well as radiation and chemicals – research has found that dentists have a higher-than-average risk of some cancers (brain, skin and reproductive). Other studies have shown higher rates of suicide and divorce among dentists. Could those be fueled by mercury, as well? Notable symptoms of what was historically called Mad Hatter’s Disease – a condition caused by hat-makers’ prolonged exposure to the mercury used in their trade – include mental confusion, emotional disturbances, pathological shyness and irritability.

There are many potential points of mercury exposure in a conventional dental office, putting both patients and dental workers alike at risk.

Amalgam comes in measured capsules that have to be shaken, then broken into a dappen dish. Inevitably, no matter how carefully it’s done, some is bound to spill. Without proper precautions, some of this will contaminate the air and some may enter the office plumbing and its journey through waste water into the environment. There are waste capsules and scrap amalgam to deal with. If existing amalgams are removed, both mercury vapor and particulate are released.

Imagine working in that environment all day, every day.

It’s why practices like ours go to such lengths to practice mercury-safe dentistry, doing all we can to minimize exposure. You can learn more about proper safety measures here, here and here.

As mentioned, radiation is another major threat to dental workers’ health. While there are standard safety regulations to minimize exposure – the Texas guidelines run over a 100 pages – the fact remains that older equipment used for making x-rays on film emits much more radiation than newer, digital machines. Some have estimated the difference in exposure to be as much as 90% less in digital. Older equipment is also more prone to leakage, providing an even bigger dose of radiation to the dentist and office staff.

Another benefit of digital over film: As we noted before, going digital means we don’t have to keep harsh, noxious chemicals in the office for processing the images. And when we do take images, it’s only when required for proper diagnosis or evaluation of a condition. We believe the risks of radiation are enough that x-rays should never be “routine.”

After all, the most fundamental concept in the healing arts is to first, do no harm…