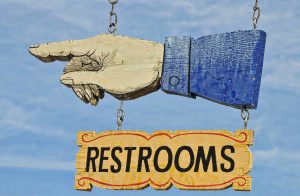 Perhaps nowhere is the mouth/body relationship clearer than in gum disease – a condition that’s been said to affect nearly 80% of all Americans and scientifically linked to many other inflammatory conditions, from diabetes and heart disease to Alzheimer’s and cancer.

Another that we can add to the list is inflammatory bowel disease (IBD), which includes Crohn’s and ulcerative colitis. While earlier research has highlighted the connection, a new study in the journal Cell sheds a little more light on how the health of the oral microbiome may influence the severity of this gastrointestinal disorder.

However, in mice with IBD, the healthy gut bacteria are disrupted, weakening their ability to resist disease-causing bacteria from the mouth. 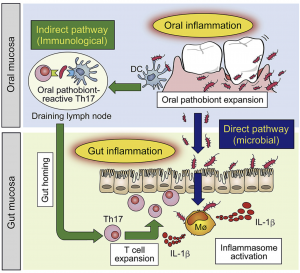 Another possible pathway may occur when periodontitis activates T cells in the mouth, which then travel to the gut. While the gut’s normal microbiome is held in balance by the action of inflammatory and regulatory T cells that are “fine-tuned to tolerate the resident bacteria,” oral inflammation generates mostly inflammatory T cells. According to the research, once these T cells get to your gut, they actually worsen disease by triggering the gut’s immune response.

Either way, what you get is essentially a “clash between the mouth and gut microbiomes.”

However, the authors were careful to add that there’s no evidence yet that either of these pathways is the sole cause of gastrointestinal inflammation. The inflammatory response wasn’t observed in healthy mice, just those with “pre-existing gut microbiome dysregulation.”

William Giannobile, DDS, another co-author, summed up the findings.

This exacerbation of gut inflammation driven by oral organisms that migrate to the gut has important ramifications in emphasizing to patients the critical need to promote oral health as a part of total body health and wellbeing.

Yes, you’ve heard that line of reasoning plenty of times before, but the value of good oral hygiene is so great, it bears repeating again and again.

And just as with other chronic conditions such as diabetes and arthritis, where symptoms may improve when you up your oral hygiene, knowing you may be able to better manage gut inflammation with daily brushing and interdental cleaning can be good incentive to keep up those healthy habits.