Gum recession is a pretty common problem. Incredibly overgrown gums? Not so much. 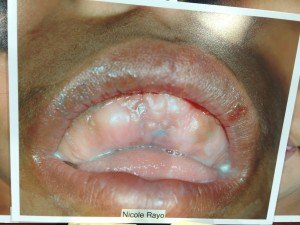 Hence, it was news when a couple of girls – Muriel and Nicole Rayo, ages 11 and 12, respectively – had surgery to correct a condition called hereditary gingival fibromatosis. The sisters’ gums had become so enlarged that their teeth were fully encased, creating both functional and aesthetic concerns.

Not many people inherit this condition – only about 1 in every 750,000. The excessive growth tends to start once a child’s permanent front teeth come in. Not only can this excess tissue cover the teeth but the roof of the mouth, as well.

In severe cases, surgery is the only option – and those of the Rayos certainly qualified as that.

“We see cases of gingival overgrowth, where the gums grow, but it’s partial. It’s really not to the [extent] or the severity of what these two girls had,” said Dr. Maria Hernandez, post-grad director of the periodontal department at Nova Southeastern University.

And according to Miami Children’s Hospital,

Together, the team planned two surgeries, one for each child, to remove the overgrowth of the gum as well as some of the girls’ baby teeth which were also encased in the gums. The surgeries proved to be a success and both sisters were back home and smiling within two days of their surgeries.

This wasn’t the only strange dental case that turned up this summer. Maybe you heard about the Indian teen who had 232 “teeth” extracted. Only they weren’t teeth exactly. They were denticles, tooth-like growths caused by a non-cancerous oral tumor. The growths, which were removed in a six hour surgery, were all attached to the young man’s lower right jaw. Fortunately, doctors were able to save his permanent teeth.

But even though this case didn’t really involve teeth, there are indeed cases where a person may have more than the usual 32 permanent teeth – a condition known as hyperdontia. It’s hardly rare. Anywhere from 1 to 4% of the population have a couple extra or “supernumerary” teeth.

Such teeth don’t necessarily need to be removed. However, they can sometimes cause problems – for instance, alignment and occlusion (bite) issues that lead to chronic headaches and neck pain. They can also interfere with the eruption of adjacent teeth or cause crowding, leading to the need for orthodontics.

Most of the time, there’s just one tooth involved, but there have been documented cases of more than 30!

Next time flossing seems like a chore, maybe be grateful you have just the usual number of teeth to tend to.