Oral cancer screening is a crucial part of your oral exam. After all, when caught early, it’s readily treatable, with a 5-year survival rate of 84%.

But less than a third of oral cancers are diagnosed at this stage. This is why the overall survival rate is much lower: just 57% – worse than for many more familiar types of cancer.

By far, the most common form of oral cancer is oral squamous cell carcinoma (OSCC), accounting for 90% of all cases. If the cancer is on the tongue or floor of the mouth, the 5-year survival rate is 75% or better. But if it spreads to the lymph nodes, the survival rate drops by roughly half.

Early diagnosis can be literally life-saving.

Tobacco use, heavy drinking, and HPV infection are the three biggest risk factors, but new research in PLoS Pathogens suggests that some bacteria in the mouth may make these cancers worse. 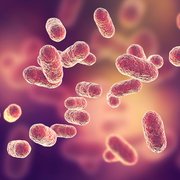 But they also found that nisin – “a bacteriocin and a commonly used food preservative” – appeared to interfere with that process. A bacteriocin is a toxin produced by bacteria to inhibit the growth of similar microbes, and this particular one is produced by culturing Lactococcus lactis, which is used a lot in the production of buttermilk and cheese.

According to the authors, this study offers the first direct evidence that a bacteriocin inhibits oral cancer formation mediated by periodontal pathogens. Moreover, the findings suggest that nisin could have broad therapeutic potential as an antimicrobial and anticancer agent, and as an inhibitor of pathogen-mediated cancer formation.

So can keeping your gums healthy help lower your risk of developing cancer – oral or otherwise? More evidence is needed, to be sure. Still, findings like these can be powerful motivation to keep up with the habits that support healthy teeth and gums – not just brushing and interdental cleaning, but also things like healthy eating, quality sleep, regular exercise, and stress management.