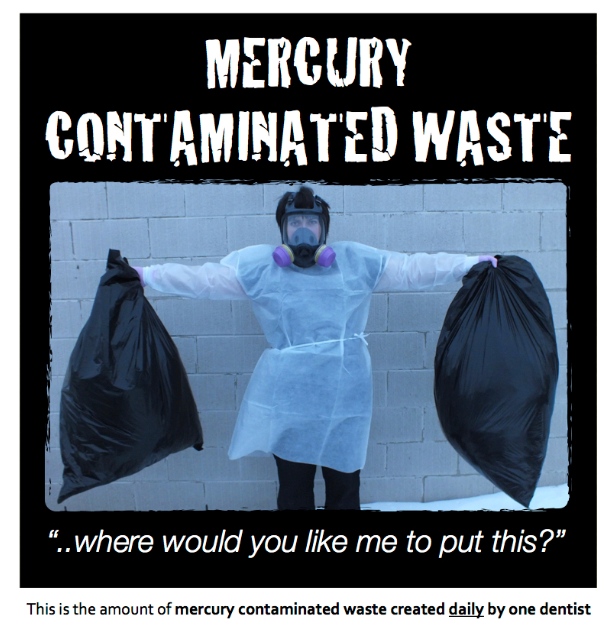 This treaty sets standards specifically designed to protect the environment, including provisions for a phase-down of dental mercury – the main ingredient in “silver” amalgam fillings.

But it doesn’t call for a phase-out, even as half of all mercury pollution can be traced to the dental industry. Some of that is waste improperly disposed of by dental offices. Some is excreted by people. As DAMS executive director Leo Cashman notes in a powerful critique of the treaty,

Between 300 and 400 tons of mercury are used globally in dental amalgam mercury fillings per year. Whether the mercury from dental amalgams accumulates in a person’s body or gets excreted into a toilet and out into the sewage treatment system, dental mercury is going to cause problems somewhere. A treaty that doesn’t deal with the dental amalgam mercury problem in a firm way is an environmental and a health failure.

While a true end to the use of dental mercury worldwide remains elusive, there are practices committed to being not only mercury-free but mercury-safe. That includes our own.

Just one amalgam filling releases as much as 15 micrograms of mercury each and every day. That may not sound like much, but keep in mind that there is no recognized safe level of this potent neurotoxin.

In general, some people can tolerate amalgam fillings for a long time; others cannot. If you have amalgam fillings and are experiencing symptoms of mercury exposure – including but not limited to tiredness, anxiety, headaches, and memory loss – you should make an appointment with a qualified biological dentist to be evaluated.

Some have reported significant health improvements upon mercury removal and thorough, supervised detox. However, it is critical that, should you choose to have your amalgams removed, the removal be done safely. If proper protocols are not followed, much greater mercury exposure can occur.

That’s why mercury-free is not enough. Mercury-safe matters – for the health of the patient, the dentist, office staff and the planet.

For starters, good air filters in the operatory are a must. The patient will also be protected by

The dentist will then use a rubber dam – essentially a square of rubber or silicone – to isolate the operation area so the filling can be removed in small chunks with use of a drill. The dental dam, along with the use of suction devices and copious amounts of water, helps make sure that the patient does not breathe, swallow or ingest the mercury particles.

A recent study in the Journal of Occupational Method and Toxicology demonstrated just how crucial water and suction are. It found that when both were used, mercury vapor levels were about 4.0 to 19.0 μg/m3. When neither was used, levels jumped as high as 796 μg/m3 – and even higher than that when only suction was used.

Here at Pride Dental, we are committed to improving your health by being both mercury-free and mercury-safe. Along with other conscientious dentists who, every day, follow the IAOMT’s protocols for the safe removal of mercury amalgams, we put the safety of our patients, staff and the environment at the forefront of our mission.