It’s so nice to be able to end the year with some good news!

According to a recent email from Charlie Brown at Consumers for Dental Choice, the world’s top dental products manufacturer, Dentsply Sirona, has read the proverbial writing on the wall and is no longer selling the stuff.

The coup de grâce for Dentsply appears to have been FDA’s recommendation against amalgam use in high-risk populations – a milestone Consumers for Dental Choice achieved in 2020 with your support. As Dentsply explained:

“In September 2020, the FDA issued an updated recommendation that certain people are at higher risk for health problems from mercury-containing amalgam dental fillings, such as pregnant women and their developing fetuses, women who are planning to become pregnant, nursing women and their newborns and infants, children, especially those younger than six years of age, people with pre-existing neurological disease such as multiple sclerosis, Alzheimer disease, or Parkinson disease, people with impaired kidney function, and people with a known allergy to mercury or other components of dental amalgam.”

For more about the FDA’s change-of-tune, you can read our comment on the news here.

Protecting children against mercury exposure is particularly critical, of course, as their small bodies and developing brains make them especially vulnerable to its effects. Yet there are still some who insist that amalgam fillings are less of a concern than something like seafood. A study published this past October in Toxicology Sciences suggests otherwise.

Using data from just over 14,000 children in the two most recent National Health and Nutrition Examination Surveys (NHANES), the researchers classified the kids according to seafood consumption. Those who had fillings were also grouped according to the presence of amalgam in their mouths. 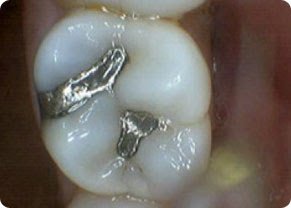 About two-thirds had no amalgam, while roughly 20% had at least one mercury filling and no more than 5. The remaining 16% had more than that.

A “strong correlation” was also found between mercury levels and the number of mercury amalgam fillings in the mouth. For the non-seafood eating kids, the ones who had more than 5 amalgam fillings had higher total blood mercury (103%) than their amalgam-free peers. Their blood inorganic mercury and urine mercury levels were considerably higher (221% each).

The biggest difference of all?

Subjects under six years old with more than five [amalgams] had the highest blood [inorganic mercury] and urine [creatinine corrected mercury] among all age groups.