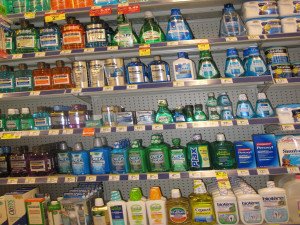 Specifically, the authors looked at whether changes in oral flora – bacteria in the mouth, both “good” and “bad” – might affect blood pressure. This is because those microbes play a role in turning nitrate into nitrite – a precursor for nitric oxide, which widens blood vessels and thus reduces blood pressure.

The antiseptic used was chlorhexidine, a disinfectant found in some over-the-counter mouthwashes and often prescribed by dentists after oral surgery. Study participants were instructed to rinse twice daily with a chlorhexidine solution for one week. The results were stunning: a 90% drop in oral nitrite production and a 25% reduction in plasma nitrite levels. As for blood pressure, it

Now, this is a small study, to be sure, but a provocative one that could press the issue of whether “killing germs” is really the best way to go.

It’s certainly been the way to sell mouthwash over the years:

“What we’ve been brought up with,” says Dr. Philip Marsh of the Leeds Dental Institute, “is ‘Plaque is bad – get rid of it.'”

But it’s actually too much plaque and plaque in the wrong places that are bad for us. We want to prevent the buildup of levels of organisms, particularly in hard-to-reach places of the mouth, that could lead to disease….Pushing to have an ultraclean mouth isn’t beneficial to us; we should be trying to maintain our natural microbiota at levels compatible with oral health in order to preserve their beneficial activities.

You don’t want a sterile mouth; you want a mouth that has primarily good bacteria in it, in order to keep exogenous microorganisms out and prevent them from colonizing….

Consequently, you see the emphasis these days shifting from zeroing in on the “bad bugs” to nurturing the good – the subject of fascinating read in Scientific American a while back. “Many current treatments,” on the other hand,

do not improve oral ecology — in fact, they might make matters worse. Although some mouthwashes merely mask unpleasant odors, alcohol-based rinses sold in drugstores and prescription rinses containing chlorhexidine or other antiseptics target all oral bacteria, stinky and otherwise. Shi says that approach has several drawbacks. A chlorhexidine rinse, for example, may improve breath for as long as 24 hours but can temporarily change the taste of food. In one study, 25 percent of subjects experienced a tingling or burning sensation on the tongue after a week of use. Heavy use of rinses with alcohol can dry out the mouth, sometimes exacerbating bad breath. Further, wiping out too many of the mouth’s native bacteria could disrupt the usual checks and balances, making way for opportunistic species responsible for gum disease and other infections to move in and take over.

Of course, one of the easiest ways to improve oral ecology is with diet, steering clear of the sugary, acidic, hyper-processed foods oral pathogens prefer and opting for a whole foods-based diet instead. Feeding the body what it needs is critical toward keeping it in balance, self-regulating as it was designed to do. There are some probiotic products available that may also nurture beneficial bacteria, but in general, more research remains to be done.