Mouth Guards: Protecting Your Teeth (& Maybe Even Your Brain)

Sure, legendary Cowboy running back Tony Dorsett will get his share of the NFL’s settlement with former players over concussion-related brain injuries, but what he – and other players – lost remains invaluable.

My brain is priceless. There isn’t enough money that they can give me to make me want to look the other way.

Last year, Dorsett was diagnosed with signs of chronic traumatic encephalopathy – a progressive degenerative disease that only be definitively diagnosed after death. Symptoms include negative changes in mood, cognition and behavior. There’s no treatment known to reverse the damage. Early death is common.

Of course, most of us don’t play sports anywhere near the level of pros, nor with the intensity. Still, there are risks, and equipment for playing safely is a must – especially when it comes to contact sports. In fact, one seemingly minor choice can make a difference. 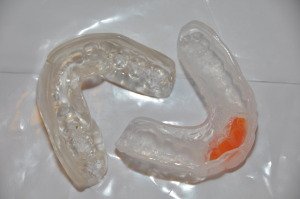 According to the Academy of General Dentistry, mouth guards prevent more than 200,000 injuries every year – including mouth cuts, jaw injuries and tooth damage. When properly fitted, the can also provide some protection from concussion. Although their main purpose is to protect the teeth, there is research that suggests they may also “help absorb shock, stabilize the head and neck, and limit movement caused by a direct hit to the jaw.”

The key is that they are properly fitted – as demonstrated by a study published earlier this year in General Dentistry. Researchers observed 412 high school football players, some of whom were given custom mouth guards, while others received standard, over-the-counter (OTC) devices. Those with the OTC guards turned out to be more than twice as likely to suffer mild concussions.

It makes sense that a device designed specifically to fit your teeth and bite would be more effective. It fits snugly and more comfortably than any one-size-fits-all unit ever could. They can even be designed to facilitate better breathing. Yes, they can cost more, but they also tend to be more durable.

An in-between option is an OTC “boil and bite” mouth guard. Boiling it softens the plastic so you can bite into it and thereby customize it to your bite. They have their drawbacks, though:

Available in limited sizes, these mouthguards often lack proper extensions and repeatedly do not cover all the posterior teeth. Dental mouth arch length studies have shown that most boil and bite mouthguards do not cover all posterior teeth in a majority of high school and collegiate athletes. Athletes also cut and alter these bulky and ill fitting boil and bite mouthguards due to their poor fit, poor retention, and gagging effects. This in turn further reduces the protective properties of these mouthguards. When the athlete cuts the posterior borders or bites through the mouthguard during forming, the athlete increases their chance of injury, especially concussion, from a blow to the chin. Some of these injuries, such as concussion, can cause life long effects.

Additionally, these units tend to be bulky, making it harder to breathe, talk and drink normally.

That said, they’re better than nothing, but considering what’s at stake, investing in a custom mouth guard is the wisest option.