Mouth Guards May Protect More than Just an Athlete’s Teeth

With this year’s Super Bowl right around the corner, most Americans have at least a little bit of football on the brain – if not for the championship match-up itself, the unveiling of new, often over-the-top ads throughout it.

But whether you watch it for the game or ads – or don’t watch it at all – one thing definitely remains true: When playing any kind of sport, protective gear is a must.

And it’s not just the obvious things like the helmets and shoulder pads, knee pads and shin guards. In fact, one crucial piece of protective gear may not be so noticeable but equally (if not more) important. 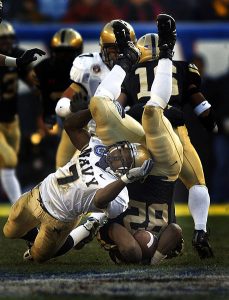 And this is especially so when it comes to protecting against concussions. According to the National Safety Council, a child in the US is treated for a sports-related concussion every 3 minutes. As many as 3.8 million athletes suffer a concussion every year. Countless other cases go unreported and undiagnosed.

These mild blows or jolts to the head can have immediate effects, such as blackouts, nausea, and fatigue. More concerning are the potential long-term effects, including brain damage and even death.

Brain injuries cause more deaths than any other sports injury. In football, brain injuries account for 65% to 95% of all fatalities. Football injuries associated with the brain occur at the rate of one in every 5.5 games. In any given season, 10% of all college players and 20% of all high school players sustain brain injuries.

But as we’ve noted before, mouth guards may help prevent injury. They essentially function as a cushion between the teeth, protecting them but also absorbing some of the shock from impacts and stabilizing the head and neck.

This was shown again in a small but compelling study in Dental Traumatology, in which five male participants were fitted with custom-made mouth guards. A weighted pendulum was then positioned to strike their chins. The impact was monitored by sensors placed on the forehead and left jaw joint.

With or without clenching, the guard made a difference, reducing the impact of the pendulum blows – at least in the case of a small impact load.

While many sports have similar risks of trauma and blunt force to the face – from people or objects – many sports still don’t require gear that protects the mouth and jaw. You do see more voluntary use of wrap-around protective plates on baseball helmets in the wake of some high profile bean balls, but their use remains optional.

Perhaps it’s no surprise, then, that baseball, along with basketball, has been associated with the greatest number of dental injuries. In football, mouth guards are mandatory.

But bear in mind: Not all mouth guards are created equal. Stock devices that are supposedly “ready to use” out of the box have been found to provide the least protection. “Boil and bite” guards are somewhat better, but they still tend not to fit as well, which reduces their protective ability.

As with their cousin, the night guard – worn during sleep to protect the teeth from the force of clenching and grinding – the best option is a custom-fit device made from a model of your teeth. It fits the mouth it was made for perfectly and, being thicker, too, offers a higher level of protection.

We’ll say it again: While an over-the-counter guard may be better than nothing, over the long haul, custom is the way to go.