The EPA rule requiring mercury amalgam separators in dental offices has been revoked. This turnabout fascinates us. Mercury is, after all, a known neurotoxin with unique properties.

In fact, a 15th century a German sage marveled at its physical  properties,  saying,

This quicksilver is neither too hot, nor too cold, nor too moist, nor too dry, but it is a well-tempered mingling of all four.

Mercury is seductive.  Perhaps you can recall a fascination with the beads of a broken thermometer? How you marveled at the curious dry yet fluid metal as it escaped your grasp?

Mercury proves itself elusive to our intellectual grasp as well.  For even as scientific documentation justifies our fear about mercury’s toxic nature, it plays an intimate role in our daily lives. This shapeshifter has found its safe haven in the most intimate orifice our body, our mouths. 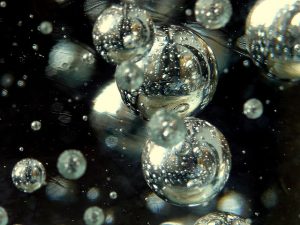 The Minamata tragedy  and others like it capture the damage caused by exposure to environmental mercury. But a recounting of historical snapshots only frames part of the picture. There are tragedies we recognize, and tragedies we choose not to recognize. Intellectually, while we know mercury is toxic, many refuse to acknowledge the damage that mercury lodged in teeth poses. For as long as a mercury filling sits in a mouth, mercury vapors leach out, inches from our brain. It’s a silent and chronic toxin. Somehow, this pollution is still allowed in people’s bodies while agencies worldwide work to contain it in the environment.

According to a 1977 article in The Atlantic,

But even if stringent controls on all sources of mercury pollution were strictly enforced, many scientists suspect that mercury already in the water supply will remain a threat for years to come. The reason is that when “inorganic” mercury salts enter a lake or river, they sink to the bottom, where they are slowly converted by microbial action into the “organic” methyl mercury form which killed scores of Japanese twenty years ago and poisoned the Quebec Indians last year. Once converted to the organic methyl mercury form, the poisons move up the food chain from phytoplankton to fish to man. That could mean that microbes will be converting the 200,000 pounds of mercury now resting on the bottom of Lake St. Clair alone into methyl mercury for the next 5000 years. And the mercury now there cannot be easily removed, since dredging operations would disseminate it more widely. Verdict: The mercury crisis may be forgotten, but it is not over.

Documentation of mercury damage can also be elusive. Certainly, mass poisonings have caught our attention, but overall, we appear to be nation with short-term memory loss.

In all its forms, mercury is toxic. Mercury is never inert. In the US mercury used in dental amalgam is dumped into wastewater treatment centers at the rate of 4.4 tons per year. This mercury sewage bioaccumulates in the fish we eat. In the US, mercury contaminated fish ushers a constant warning to pregnant women and young children. The set of scientific facts that generated a warning in the US were evaluated in the EU, where the risks were recognized and a ban was issued.

In the US, we’re still debating on how to keep mercury sludge out of wastewater facilities. Even if you never thought of yourself as an activist, you could help keep 4.4 tons of mercury out of our waterways. Read this.  Wherever  you go for dental services, ask them if they use a mercury amalgam separator. The question is a simple act that will ensure dentists everywhere hear what’s important to you. Your question gives them an opportunity to not only do the right thing, but for the right thing to matter.