Here’s something you don’t see every day: 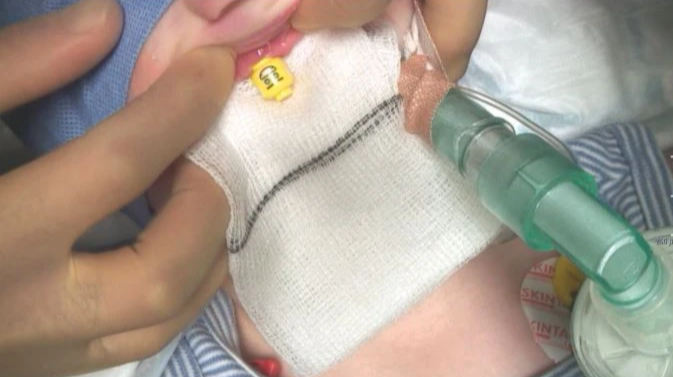 Yes, that’s a Lego head. Stuck onto a child’s tooth. And it’s not the first time that such a thing has happened. Since kids will be kids, it probably won’t be the last either.

The current case was reported in a light-hearted letter recently published in the BJD:

The patient presented to our accident and emergency (A&E) department with what initially appeared from afar to be an extruded upper right central incisor (51). Closer examination revealed a bulbous, yellow, foreign object, with a gleaming smiling face on the surface. The object was identified as a Lego head. The patient had firmly positioned the toy over the crown of his tooth so that it was flush to the gingival margin. The object was able to spin around with ease upon the tooth. This caused a functional, occlusal and aesthetic concern, but more importantly, a possible airway risk.

They successfully removed the Lego to reveal a decayed tooth, which was also removed.

The practitioners who reported this jokingly referred to the 3-year old’s Lego-crown as a variation on the Hall crown technique, in which a decayed baby tooth is simply covered by a stainless steel crown to keep the decay from getting worse.

But while there’s some evidence that it works, less consideration seems to have been given to the effects of placing stainless steel – or any metal – in the mouth.

One of the most obvious issues is the potential for oral galvanism, which can occur when different metals are present in the mouth. Electrical currents can be generated with saliva acting as a kind of conduit, creating a kind of “battery effect.” This, in turn, can accelerate the release of metal ions from the restorations. As one study in the International Journal of Dentistry noted,

Stainless-steel crowns release nickel, chromium, and iron in [the] oral environment, and the ions are absorbed by the primary molars’ roots. The additional burden of allergenic metals should be reduced if possible.

Both chromium and nickel are toxic, but especially nickel. As Dr. Hal Huggins once wrote, nickel

is the number one cancer stimulating metal, even worse than mercury – because mercury usually kills cells, whereas nickel just turns the cell malignant. Although cobalt and chromium individually do not cause cancer, if they are combined into one mixture, they will cause cancer.

Nickel causes DNA damage in preventing cells from repairing and from duplicating. It has pronounced adverse effects on the immune system, destroying T-cells and especially the NK cells that are our major defense against cancer. Alteration of chromosomes is another pastime of nickel.

Sounds pretty unsafe doesn’t it? But it’s cheap. That’s why we find it in removable partial dentures, orthodontic braces, adult crowns and bridges (especially as the base under porcelain crowns) and children’s “chrome crowns”….

In fairness, studies of metal release from stainless steel crowns – such as this and this – note that the total amount of exposure is below the threshold for toxicity. But you also need to consider that we’re each exposed to countless toxins every day, even when we’re careful and conscientious. Such a crown would be just one source among many.

Why add another potential exposure when there are healthier options available? When caries are caught early, non-invasive interventions can help stop the disease process and support natural remineralization of the teeth. We can place fluoride-free, BPA-free sealants to help protect against decay in the first place and opt for biocompatible materials when teeth need to be repaired.

And, no, those don’t include Legos. 🙂