Is Your Baby’s Food Too Sweet? 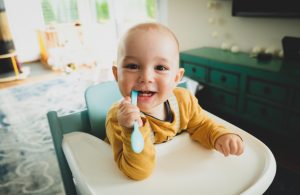 A team of researchers from Penn State and the University of Colorado recently surveyed a range of baby foods claiming to be “loaded with dark green vegetables.” Those claims, they found, were misleading.

According to John Hayes, lead author of the study, this can end up misguiding well-intentioned parents.

If parents don’t stop and taste these foods themselves, the front of the package may lead them to think these products taste like vegetables rather than a fruit puree.

This, in turn, can make it harder for kids to develop a taste for green vegetables such as broccoli, spinach, or Brussels sprouts. Children are already hardwired to like sweet flavors, so if they’re not exposed to the true flavor of vegetables early on, they may not want to eat them when they’re older.

Study co-author Alyssa Bakke explains that the reasons why veggies are a tough sell are totally understandable. Vegetables tend to be more bitter than other foods. They also tend to have less intense, more subtle flavors.

Sometimes we have to overcome things like bitterness. The number one way we do that is just repeated trial – trying it over and over and over again. If this is done early on, we can prepare people to have a liking for vegetables throughout their whole lifetimes. 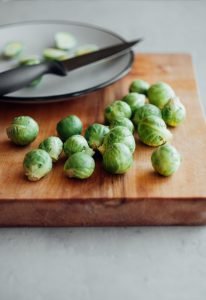 Other studies suggest that infants have a “flavor window” that likely opens at 4 months and closes around 18 months, and that parental persistence is key.

Toddlers can be made to like a new food by introducing it 5-10 times. Kids aged 3-4 may need to try it 15 times before developing a taste for it.

Any parent who’s had a dinnertime showdown – or remembers suffering through one as a kid – knows that getting a kid to try a veggie 5 to 15 times is challenging. But the payoff is real.

Giving a child new foods repeatedly during the flavor window makes it more likely that they will like those foods. And liking those foods makes them more willing to try other new foods.

So how to start?

There are plenty of great resources for how to begin weaning your baby, which foods you might begin with, and how to make your own baby food. And remember to avoid the sweet trap yourself: Don’t mask the flavor of dark green leafies with fruit or sweeter veggies!

If your kids are older, their food window can still be pried open. You just may need different strategies. Maybe get them interested by investing them in the process – gardening, cooking, or helping with the shopping.

Another fun idea is making butter together – from raw organic cream if you can source it (here are some options in Texas) – then serving it up on those steamed veggies. Butter not only cuts the bitterness of dark green vegetables; it also helps your body absorb the nutrients in them!

Raising kids to eat healthy is a big job, in part because adults also have to set a good example. But just like with oral hygiene, developing and keeping good dietary habits is important for whole body health and your whole family’s health!