And what are they singing?

Hello, you probably heard of me at least once –
Your wisdom tooth.

Believe it or don’t, it’s a love song – in which the wisdom tooth does the anatomically impossible, pushing other teeth aside to pierce the heart. 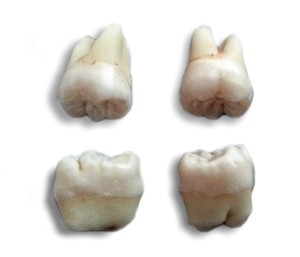 Also known as the third molars, wisdom teeth are the ones that come in furthest back in the jaw. There are usually four but can be fewer, and some people have no wisdom teeth at all. When they are present, they make their appearance long after the other permanent teeth have come in – usually sometime between the ages of 17 and 25.

For our larger-jawed, prehistoric ancestors, these teeth gave the advantage of being able to chew tougher foods. Unfortunately, they don’t fit so well in our smaller jaws. They may be impacted, growing in at an angle or never completely erupting. In such cases, they may need to be extracted.

Yet for years, it was standard practice to remove third molars, regardless of their health. The idea was that they can be hard for some people to clean well, putting them at risk for cavities, gum disease, bad breath and other problems. So why not just take them out – remove them prophylactically?

After all, you can’t get cavities in teeth you don’t have.

On the other hand, can you think of any other vital organ you’d have removed just because it might cause a problem down the road?

Removing any tooth is a surgical procedure. No surgery is risk-free, including wisdom tooth removal. Any surgery causes general trauma that the body would not have experienced otherwise. In extreme cases, wisdom tooth removal has resulted in death, although ABC News noted in its coverage of one such case that

the most common complication – permanent nerve damage causing numbness of the tongue, lips or cheeks – affects more than 11,000 people annually, according to a 2007 report in the American Journal of Public Health. But the surgery has also been linked to jaw and tooth fractures, brain tissue infections, life-threatening bleeding and hypoxia.

Unless the sockets are properly cleaned, extractions also raise the risk of cavitations – sites of dead and decaying tissue in the jawbone that have been shown to contribute to a variety of systemic health problems. As Drs. Thomas Levy and Hal Huggins put it in the title of one of their research papers, “routine dental extractions routinely produce cavitations. (You can learn more about this and other oral-systemic health issues in Let the Tooth Be Known by Dawn Ewing, a doctor of integrative medicine.)

Mainstream dentistry is questioning the need of “routine” wisdom tooth extraction, too. As Roni Caryn Rabin wrote for the New York Times a couple years back,

Each year, despite the risks of any surgical procedure, millions of healthy, asymptomatic wisdom teeth are extracted from young patients in the United States, often as they prepare to leave for college. Many dental plans cover the removal of these teeth, which have partly grown in or are impacted below the gum.

But scientific evidence supporting the routine prophylactic extraction of wisdom teeth is surprisingly scant, and in some countries the practice has been abandoned. “Everybody is at risk for appendicitis, but do you take out everyone’s appendix?” said Dr. Greg J. Huang, chairman of orthodontics at the University of Washington in Seattle. “I’m not against removing wisdom teeth, but you should do an assessment and have a good clinical reason.”

Last year, a review by the Cochrane Oral Health Group found no need to treat asymptomatic wisdom teeth, or wisdom teeth without problems. “Watchful monitoring of asymptomatic third molar teeth,” wrote the authors, “may be a more prudent strategy.” Recommendations from the American Association of Oral and Maxillofacial Surgeons now say patients may keep their wisdom teeth if the teeth are “healthy,…as long as you undergo regular exams and X-rays to catch signs of trouble.”

The belief in “routine” removal of wisdom teeth seems to suggest that the very existence of these teeth constitute an inherent flaw in people’s mouths – a notion belied by the critical research done by Dr. Weston A. Price through the early decades of the 20th century. Studying orofacial development in cultures unaffected by Western diets and lifestyles, Dr. Price found that caries and crooked or crowded teeth result from poor nutrition. The biggest culprits? Refined sugars and white flour.

Those who ate traditional diets, on the other hand, consistently had larger jaws, wide smiles and naturally straight teeth. This is why we consistently encourage diets based on whole foods, minimally processed, organic whenever possible and with little or no added sugars.

Of course there are times when wisdom tooth removal makes sense. If you’re advised to have yours – or your child’s – extracted, ask if they are causing an immediate problem. If not, talk with your dentist about the option of leaving them be. Keeping them clean may be a little harder for the simple fact that the teeth are further back, but it isn’t impossible.