How Do You Know When “Organic” Is Really Organic? 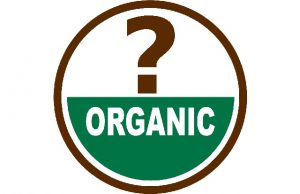 As we mentioned last time, trust is a big issue when it comes to food labeled “organic.” When people don’t trust it, they don’t buy it.

But matters of trust can also be confounded by our own expectations – and lots of people have different, not always correct, ideas about what “organic” actually means.

According to the USDA,

Organic crops are raised without using most conventional pesticides, petroleum-based fertilizers, or sewage sludge-based fertilizers. Animals raised on an organic operation must be fed organic feed and given access to the outdoors. They are given no antibiotics or growth hormones. The NOP regulations prohibit the use of genetic engineering, ionizing radiation, and sewage sludge in organic production and handling.

But even this doesn’t necessarily mean “all natural.” As you may already know, there are plenty of approved synthetic substances that can be used in the production of crops or animal products and still allow a food to be called “organic.”

Similarly, a processed food can still get the USDA organic seal even if some ingredients – up to 5% – are non-organic.

But these are just the tip of the proverbial iceberg when it comes to trust.

With popularity and demand, organic food production has grown beyond our current domestic capabilities. More food is being imported, yet as news has shown through the last several months, regulation may be more than a little bit lacking.

Earlier this year, for instance, shipments of corn and soybeans from Turkey wound up labeled as “organic” – and thus, worth about $4 million more than they should have been – even though the crops had been grown conventionally. And while “USDA officials say that their system for guarding against fraud is robust,” reported the Washington Post, the facts suggest otherwise.

Under USDA rules, a company importing an organic product must verify that it has come from a supplier that has a “USDA Organic” certificate. It must keep receipts and invoices. But it need not trace the product back to the farm. Some importers, aware of the possibility of fraud, request extra documentation. But others do not.

Regardless of where organics come from, critics say, the system suffers from multiple weaknesses in enforcement: Farmers hire their own inspection companies; most inspections are announced days or weeks in advance and lack the element of surprise; and testing for pesticides is the exception rather than the rule.

These vulnerabilities are magnified with imported products, which often involve more middlemen, each of whom could profit by relabeling conventional goods as “organic.” The temptation could be substantial, too: Products with a “USDA Organic” label routinely sell for twice the price of their conventional counterparts.

In recent years, even as the amount of organic corn and soybeans imported to the United States has more than tripled, the USDA has not issued any major sanctions for the import of fraudulent grain, U.S. farmers said.

“The U.S. market is the easiest for potentially fraudulent organic products to penetrate because the chances of getting caught here are not very high,” said John Bobbe, executive director of the Organic Farmers’ Agency for Relationship Marketing, or OFARM, a farmer cooperative. In Europe and Canada, he said, import rules for organics are much stricter.

Since the news broke, an industry group, the Organic Trade Association, has said it will create an anti-fraud task force. US organic farmers remain skeptical, even “amused” by the thought.

The resounding issue is a lack of transparency. First, auditors found that the agency’s Agricultural Marketing Service (AMS), which houses the NOP, did not clearly share with stakeholders its methodology for determining how other countries’ organic standards compared to the USDA’s. And the on-site audits meant to ensure the efficacy of other countries’ certification practices were not conducted in a timely way, auditors found.

In addition, once products reached the U.S. border, auditors found that the agency did not provide reasonable assurance that inspectors reviewed the required documents proving organic practices at U.S. ports of entry. Finally, auditors also found that millions of pounds of organic products were sometimes fumigated with conventional pesticides to prevent invasive pests from entering the country, but still labeled and sold the food as organic.

“While most organic food is safe, and dramatically reduces your exposure to pesticides, the report reveals serious regulatory gaps that allow a few bad actors to ship sham ‘organic’ products to the U.S.,” explained Bill Freese, a science policy analyst at the Center for Food Safety. “The USDA must up its game to block these imports, both to protect consumers and ensure a level playing field for American organic farmers.”

So what can we do? Is there any way to make sure that the organic food you buy is really organic?

The only sure way right now is to start your own garden. Then you control what’s put in, on, and around your food. It doesn’t need to be huge. Start small with just a simple tomato plant, say, or a few peppers, both of which can be very fruitful with pretty low maintenance. As your green thumb develops, you can always expand with more plants.

If you support your local community gardens, farmers markets, and CSAs, you can find out as much as you want to know about how the foods were produced. You can ask the growers directly – something impossible to do at a big box store or even your local grocery store.

That said, more and more supermarkets now are starting to feature more local, organic produce, at least. If that’s not an option, at least seek domestic products, which are more regulated for now.

And if money is a concern, there really are ways to eat organic on a budget. Here are some tips to get you started.