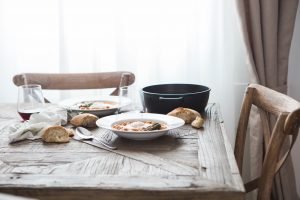 Scrumptious foods and the holiday season go hand-in-hand, but often, those foods are filled with the kinds of things you aim to avoid when eating healthfully – a glut of sugar and other refined carbs, with nary a veggie in sight.

But you don’t have to sacrifice taste for nutrition. You can just embrace a new tradition – or, rather, traditional foods – delicious, nutrient-dense dishes made from real, whole foods and free of pesticides, preservatives, and industrial processing.

That means healthy proteins and fats, whole grains, seeds and beans, plus those all-important fruits and veg.

Not everyone’s healthy diet will look the same, though. Just as each person is unique, with a variety of likes and dislikes, sensitivities, and convictions, what’s on each person’s plate will look different, too, particularly when you take into account the wide range of cuisines around the world.

One meal most cultures do share, however, is soup, which has been around for about as long as humans have been able to control fire. The foundation of any good bowl of soup, broth, is itself nourishing and a valuable component in your cooking.

Science validates what our grandmothers knew. Rich homemade chicken broths help cure colds. Stock contains minerals in a form the body can absorb easily—not just calcium but also magnesium, phosphorus, silicon, sulphur and trace minerals. It contains the broken down material from cartilage and tendons–stuff like chondroitin sulphates and glucosamine, now sold as expensive supplements for arthritis and joint pain.

Fish stock, according to traditional lore, helps boys grow up into strong men, makes childbirth easy and cures fatigue. “Fish broth will cure anything,” is another South American proverb. Broth and soup made with fishheads and carcasses provide iodine and thyroid-strengthening substances. 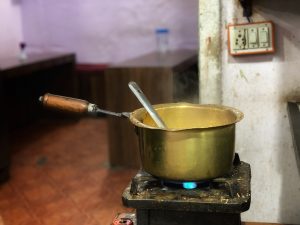 So for this holiday season, let’s explore some of the nutrient-dense and “soul-warming” soups from around the world!

First stop Japan, for sumashijiru, a clear soup that’s all about the broth, so why not make your own? Once the soup’s on, it’s your basic blank slate – you decide your choice of protein and veggies. This recipe calls for tofu, dried kelp, and mitsuba greens, but sumashijiru also can be made with beef, chicken, shrimp, mushrooms, carrots, scallions – you name it!

Or how about a Persian soup from Iran? Abgoosht is a simple stew of lamb, chickpeas, and beans cooked with tomato and onion. Seasoned with turmeric, lime, and lemon, the traditional way to serve abgoosht is to pour the broth into a bowl with small pieces of bread, while the remaining ingredients are mashed up and served separately alongside. Here’s one simple recipe to get you started. 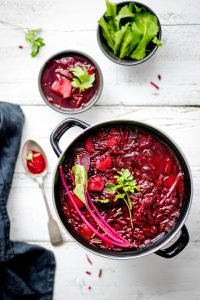 Another delicious option is borscht, the national dish of Ukraine. This magenta mix of beets, onion, potato, and cabbage is especially delicious when topped with sour cream. Go traditional or swap out the potato with root vegetables such as parsnips for a low-carb, keto variation. Either way, tuck in that napkin; this could get messy.

Scotland’s cock-a-leekie soup is as much fun to make as it is to say five times fast! There are many versions of this soup – here’s one you can try – but while all of them call for chicken and leeks, whether to include the prunes is often hotly debated. . .

Soup of the day in Costa Rica is sopa de pescado, a tasty fish chowder made with milk, butter, and a mess of veggies. This recipe calls for two sea bass heads (eyes removed), but if bass heads aren’t your cup of soup, using bass filets – or cod or grouper – would would work too!

You’ll finish your around-the-world journey in South Sudan, with a recipe for bamia tabiq, or okra stew with meat. Tomatoes and onion are the base, lamb or beef the protein, and lots and lots of okra.

If you’re thinking the only thing missing with that last recipe is chicken, rice, and chiles to turn that soup into a Texas-style gumbo, guess it means the journey ended where it should – safely at home.

Whatever your traditions or traditional meals are, we wish you a healthy and soup-tacular holiday season!