Check out this list from an article on “6 Fortifying Foods to Boost Oral Health”:

Well, the study cited in support of this food is legit. But it didn’t look at just any old gummy bears. It looked at gummy bears sweetened with xylitol – a sugar alcohol that has anti-cariogenic (cavity-causing) properties. Its authors found that such gummies reduced plaque and oral pathogens (bad bacteria) over a 6 week period. Valium 2 mg online http://www.pharmacynewbritain.com/valium

But despite the list-maker’s claim, xylitol is not “one of the main ingredients in the pre-packaged snacks.” For instance, take a look at the ingredients list for Haribo Gold-Bears, the original Gummi Bear: 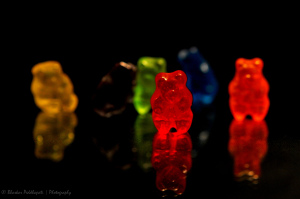 Three of the four most prevalent ingredients are sugars. Not a bit of xylitol to be seen. The case is similar for other major brands, such as Black Forest, in which corn syrup and sugar again play the starting roles. (And while it’s true that they’re “made with real fruit juice,” just as it says on the front of the package, this is actually just another form of sugar.)

Suffice it to say, these sweets aren’t so hot for your teeth. Not only are they mostly sugar, but they easily get stuck between teeth, giving oral pathogens more time to feed on those sugars and do their damage.

As for the sugarless variety of gummy bears made by Haribo, even they are not sweetened with xylitol but a substance called lycasin – a hydrogenated syrup that’s mostly maltiol, a different sugar alcohol. As Olga Khazan wrote earlier this year at the Atlantic,

Maltitol is great because it doesn’t cause cavities, but not so great because our bodies can’t fully digest it, so it can ferment in the gut. The known side effects of the excessive consumption of lycasin are bloating, flatulence, loose stools, and borborygmi, the scientific term for tummy-rumbling. Buy Silagra online http://sellersvillepharmacy.com/silagra.php

Though the substance is considered safe to eat, in clinical studies, adults who consumed 40 grams of lycasin saw an increased frequency of bowel movements and “watery feces.” The gummy bears in question come in bags of 5 pounds, otherwise known as 2,267 grams, otherwise known as a world of hurt.

Keep in mind the Snackwell effect – how people will offset any benefit of “diet” foods by eating lots more of them than they otherwise would – and you can see the potential for disaster.