Got Pesticides & Antibiotics? How Organic Stacks Up Against Conventional Milk 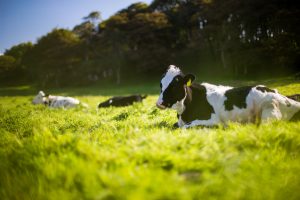 When it comes to a nutritious diet, there’s plenty of research showing the positive impact of eating organic fruit and veg, if only to avoid the pesticides on and in conventional produce.

Is there a similar benefit to organic milk? Researchers at Emory University in Atlanta decided to find out, recently publishing their findings in Public Health Nutrition. It’s the first study to look at how milk production (conventional vs. organic) may affect pesticide levels in the milk supply. It’s also the first in a decade that’s measured antibiotic and hormone levels, and compared them by production type.

All told, the team evaluated 69 milk samples – some conventional, some organic – selected from retail stores around the US. Their findings were sobering, to say the least.

Sixty percent of the conventional milk samples – but none of the organic – tested positive for antibiotic residue.

Our results demonstrated that over one-third of the samples exceeded the zero tolerance limit for sulfamethazine and/or sulfathiozole. One sample (3%) exceeded the limit for amoxicillin. This compares to the results of a study done by the FDA in 2015 in which <1 % of the 1918 samples exceeded federal limits for the antibiotics tested. . . . No detectable levels of antibiotics were found in either the organic or the conventional milk samples collected from all US states by employees of the Monsanto Corporation.

To the researchers, that discrepancy is a clear sign “that further strengthening of the monitoring system is needed to ensure the safety of the milk supply.”

They also found radically higher levels of bovine growth hormones (bGH) in the conventional samples – 20 times higher, to be precise. While low levels of growth hormones are naturally produced by milk cows, levels skyrocket when synthetic hormones have been administered. 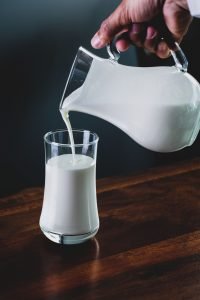 “To what impact these chemicals that we’re seeing in the supply are having, we don’t know,” said Jean Welsh, a nutritional epidemiologist who proposed the Emory study, noting that, “this study wasn’t designed to look at that.”

But we do know, from other studies, what kinds of impacts these compounds can have on human health. The World Health Organization reports that adverse health effects from pesticides include cancer, as well as problems with the reproductive, immune, and nervous systems.

Antibiotic residues may be problematic, as well.

And when it comes to hormones in dairy, the possible impact on human health may include “initiation and provoking of breast, prostate and endometrial tumours,” among other issues.

Is that really what you want in your milk? Probably not. So going organic here, too, makes good sense. Yes, budgeting for organic can be tough, but the alternative is even tougher.

Another challenge is finding a dependable source for your organic milk. Here’s where it’s good to do a little research before you grab just any gallon at the grocery.

From farms and farmer’s markets to grocery stores that carry local organic dairy, raw or treated, you can search on your own or check out city guides where your neighbors have done some of the heavy lifting for you. Just as with organic produce, you want to source local as much as possible for plenty of reasons – fresher milk, a stronger local economy, and a healthier you!