Got Gum Disease? Treatment Could Save Your Life 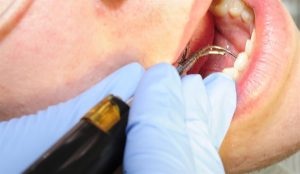 Periodontal disease affects up to 80% of Americans. It’s not just a problem in the mouth, either. It’s been linked to many other conditions, including heart disease, stroke, diabetes, rheumatoid arthritis, and some cancers.

The good news? Periodontal therapy can help reverse gum disease. This may, in turn, help improve your overall health – and, as we noted before, even save you a good chunk of change in the long run.

For instance, a new review of the science suggests that non-surgical perio therapy may improve glycemic control in people with diabetes, at least in the short term.

Patients who underwent [nonsurgical] periodontal treatment had about half a percent lower HbA1c levels three months after treatment than those who did not undergo periodontal therapy.

“Evidence from the literature suggests that successful periodontal treatment, which results in the reduction of inflammation from the periodontal tissues, improves the metabolic control of people with diabetes mellitus,” the authors wrote.

Another recent study looked at the impact of intensive periodontal treatment on blood pressure. In this case, 95 patients were randomly split between control-treatment and intensive-treatment over the course of 4 weeks, then followed for 6 months.

After one month, systolic blood pressure – the top number – was almost 3 points lower in patients who had intensive treatments. After three months, it was almost 8 points lower. Diastolic pressure dropped, too, by nearly 4 points.

At 6 months, systolic pressure had dropped almost 13 points, and diastolic had dropped by nearly 10.

The study was published last summer in the Journal of Periodontology.

Other research has found evidence that periodontal treatment may help those with chronic kidney disease and atherosclerosis (“hardening of the arteries). The latter was especially so for those “already suffering from CVD and/or diabetes.”

On the flipside, some research has found that patients who don’t respond well to periodontal therapy had “an increased risk for future CVD, indicating that successful periodontal treatment might influence progression of subclinical CVD.”

So what are the options for treatments?

While in its early stages, gum disease may often be reversed by more intensive home hygiene, nutritional improvements, and other lifestyle changes, dental help is needed when it becomes more advanced.

This can include frequent deep cleanings, such as with a laser or ultrasonic scaler, along with regular ozone treatment to keep harmful bacteria under control. Probiotics may also be recommended to help right the microbial balance in your mouth.

Between cleanings, a system like PerioProtect can also help keep harmful bacteria at bay so friendly microbes can proliferate.

But the absolute best way to treat gum disease? Keep it from arising in the first place.