Once upon a time, shopping used to involve a fair amount of walking. Now you drive to the strip mall, go to one store, get back in your car and drive across the parking lot to visit a store on the other end, get back in your car and drive … No huffing or puffing, let alone blowing someone’s house in. Living a typically sedentary lifestyle, you’d not have breath enough for something like that anyway.

But do you still look a little wolfish, folks squealing like three little pigs when you open your mouth and show off gnarly teeth and red, swollen gums?

The problem: periodontal (gum) disease – an infection of the tissues that support the teeth. In its early stages, it’s known as gingivitis, which is generally considered reversible. Not so, its more advanced and severe form, periodontitis. At this stage, both the soft tissues around the teeth and eventually the bone beneath them are destroyed.

If your gums are sensitive or bleed after brushing or flossing your teeth, it’s a likely sign of periodontal disease.

Your dentist may also observe what’s called pocketing: extra space between a tooth and the surrounding gum tissue. In a healthy mouth, this space is generally 1 to 3 mm deep. Anything deeper is a sign of disease. Pockets are especially dangerous because these areas trap and breed bacteria, which may then travel through the rest of the body causing various infections.

If periodontitis is left untreated or isn’t sufficiently controlled, tooth loss is the likely result. 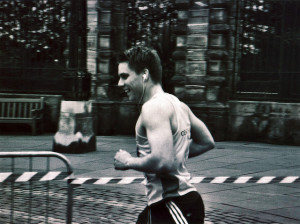 Fortunately, there are plenty of simple things you can do to prevent these kinds of problems from cropping up in the first place: eating a healthful, balanced diet; brushing and flossing regularly; exercising…

A number of studies have shown a solid correlation between regular exercise and oral health. For instance, one JADA study analyzed data from over 12,000 adults and found that

subjects who exercised, had healthy eating habits and maintained a normal weight (body mass index of 18.5 to 24.9 kilograms per square meter) were 40 percent less likely to develop periodontitis.

Another study, published in 2010 in the Journal of Periodontology, similarly found that those higher fitness levels and lower Body Mass Index (BMI) scores are less likely to suffer from periodontal disease.

Two and a half!

Feel the burn in your teeth!

Okay. So you might not be able to see your teeth getting stronger, but you’re still helping to improve your oral and overall health. As holistic dentist Dr. Vern Erwin has noted,

Physical exercise – or the lack of it – affects more than just our muscles, lungs and heart. Those are just the three areas where we feel it most. While we might get a “runner’s high,” we don’t really feel exercise in our brains, even as exercise has been shown to keep the brain fit and improve thinking. Likewise, we don’t feel exercise in our teeth and gums, but there are, in fact, established links between physical fitness and oral health.

If having good oral health isn’t enough to convince you to exercise, think of all the other benefits, including weight management, increased energy, improved mental health and attitude, stronger heart and lungs, and increased learning retention.

At the metabolic level, “physical activity also helps your body better assimilate nutrients like calcium, a crucial mineral for the remineralization of teeth.” It may also support good intestinal health and immune function.

Instead of being a permanent wolf, you can live out a different fairy tale: Run! Run! As fast as you can… Gum disease can’t catch you, you’re an exercising human!