As we’ve noted before, the thyroid is a small but mighty gland that sits just above your collarbone and plays a key role in every single bodily function.

It’s also part of a critical feedback loop to the hypothalamus and pituitary glands that live in your brain, which pretty much control all of your hormonal (endocrine) functions. Reproductive, adrenal and immune function, even your blood pressure and central nervous system depend on this glandular collaboration.

When this gland isn’t working as it should, it can mean, among other things, a higher risk of gum disease, heart disease, and other inflammatory conditions. 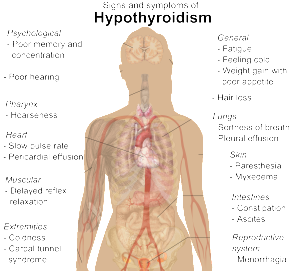 When the gland doesn’t produce enough thyroid hormone, the result it hypothyroidism. If untreated, it can ultimately lead to cardiovascular problems, impair kidney function, and reduce fertility in both men and women. Hypothyroidism during pregnancy can raise the risk of miscarriage or other complications.

One thing that can get in the way of proper thyroid function? Fluoride. A wealth of research has shed light on this problem, including a new paper recently published in Scientific Reports.

The study looked at thyroid issues among a population in central Iran where significant levels of fluoride occur naturally in the ground water. It included 198 cases and 213 controls and evaluated the effects of fluoride on T3, T4, and TSH hormones specifically.

The results were conclusive with prior studies, which found that ingestion of significant amounts of fluoride appeared to reduce T3 and T4 levels and increase TSH levels. In the current study?

Note that the “standard concentration” of naturally occurring fluoride in this study – less than 0.5 mg/L – is lower than the currently recommended level of public water fluoridation here in the United States.

So perhaps it’s no surprise that thyroid diseases, including thyroid cancer, have been advancing at an alarming rate, particularly here in the US.

So how can we reduce our exposure, particularly if we rely on fluoridated water supplies for our drinking water?

One option is to go for spring water – ideally in refillable bottles or jugs and not the single-serve plastic bottles you see everywhere.

Another is to opt for a home filtering system to treat your own water. Be aware, though, that some systems, such as reverse osmosis units, also strip out essential minerals from the water right along with the fluoride. Fortunately, there are mineral cartridges you can add to restore these vital nutrients.

Some suggest that the same can be accomplished by added a bit of unrefined Himalayan salt to your water – half a teaspoon for every gallon of water.

For more ways to reduce your fluoride exposure, check out these tips from our friends at the Fluoride Action Network.