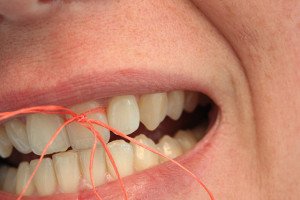 Brushing without flossing is like washing only from your toes to your rib cage. You wouldn’t ignore your shoulders, neck, face, or hair each time you shower. Yet many routinely clean less than 70% of the total surface area of their teeth, ignoring the in-between places where pathogens especially thrive.

Flossing is, in a word, essential – and critical to your overall health. But you can take it too far – as one Wisconsin woman recently found out the hard way.

According to LiveScience, the woman had developed a “nasty” and painful bacterial infection in a knee she’d had replaced five years earlier. The bacterium responsible? Streptococcus gordonii – a microbe commonly found in the mouth. It appeared that the “vigorous” flossing program the woman had begun was so aggressive, it damaged her gums.

Just as with a cut on your finger, tiny cuts in your gum tissue give pathogens access to your bloodstream, allowing them to spread throughout the body – including, as in this case, the knee. That it was an implant made it even more prone to infection since implants are not protected by the immune system.

The bacterium involved is one that has also been linked to bacterial endocarditis (inflammation of the membrane lining the heart). According to a 2012 study, S. gordonii can imitate blood-clotting proteins.

This activates platelets (cells that are found in blood and involved in clotting) and causes them to clump inside blood vessels. The resulting blood clots encase the bacteria, protecting the invader from the immune system and from antibiotics used to treat infection.

Platelet clumping can result in growths on the heart valves (endocarditis) or blood vessel inflammation that can block blood supply to the heart or brain.

S. gordonii is not the only pathogen that’s been linked with systemic health conditions. For instance, P. gingivalis – one of the main types of bacteria involved in periodontal (gum) disease – has been found in conditions as varied as heart disease, rheumatoid arthritis and cancer. A recent paper in the Journal of Oral Microbiology focused on the mechanisms of this pathogen with special respect to its role in cardiovascular diseases.

The solution here is not to avoid flossing. Far from it. Flossing is necessary to keep pathogens like S. gordonii and P. gingivalis in check. But as the case of the Wisconsin woman shows, aggressive flossing doesn’t equal effective flossing.

What is effective? Read on…