Tea is delicious and often comforting. Some types – green tea, for instance – can even be a boon to your oral health. Of course, it can also be an invisible source of fluoride (both from the tea leaves and the water used to brew it). While conventional dentistry considers this a good thing, scientific studies have shown the harm that fluoride can do.

But not all types of tea contain the same amount of fluoride, which gets into the plant via the soil it’s grown in. Teas made from the most mature leaves – green and black – contain considerably more fluoride than white teas. (Organic herbal teas, by definition, contain no fluoride since they contain no tea leaves, only herbs.) 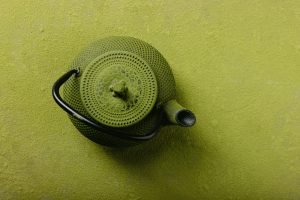 Now, a new paper in Nutrients informs that timing and brewing can also affect fluoride content, at least when it comes to matcha. This powdered green tea has a grassier flavor than regular green tea and contains higher levels of antioxidants and certain other nutrients.

For their study, researchers evaluated the fluoride content of matcha teas from different harvests and brewed at several different temperatures.

Dry samples of the matcha they used ranged from 118.39 to 121.65 mg/kg, which is very high, as you’d expect. The fluoride in the infusions they brewed ranged from 3.36 to 4.03 mg/L. The teas were made using distilled water, so there was no additional fluoride coming from the water source.

In general, they found that the higher the brewing temperature, the greater the fluoride content. The lowest concentration was found in teas brewed at 25° C (77° F); the highest, brewed at 90° C (194° F).

They also found that the matcha that was harvested later also tended to contain more fluoride.

However, matcha tea, irrespective of the harvest date or brewing temperature, is a major source of fluoride in the human diet. One litre of this beverage can contain approximately 4 mg of fluoride, providing the total daily requirement for this mineral. The lowest fluoride content was found in the beverage made at 25 °C, entailing the safest dose for humans, which this study brings to light for the first time. Matcha powder, which is increasingly popular as an ingredient in various dishes, contains a very high level of this mineral (120 mg/kg). Despite its valuable health-promoting properties and the abundance of phytochemicals, it is important to control the amount of matcha in one’s daily diet and to take into account other sources of fluoride.

Meantime, if you need some help finding out the specific fluoride content of an ever-growing assortment of tea brands and varieties, check out the resource we blogged about previously here.