Do Crooked Teeth Predict Your Death?

It’s a headline built to make parents freak out:

And as is usually the case, the reality behind the headline isn’t quite so sensational. Impressive, yes. Sensational? No.

The reality is new research out of the University of Washington School of Dentistry, which “suggests that an asymmetric lower face is a novel marker that also captures early life stresses that occur after birth.” Those early stresses can lay the foundation for ill health later in life.

[Study author Philippe] Hujoel, a professor in the UW School of Dentistry, described a crooked, or asymmetric, bite as the teeth biting backward or forward on one side of the face and normally on the other side. Backward-biting asymmetries, the most common lower-face asymmetry in the U.S. population, were found to fluctuate randomly between the left and right sides of the face. Such randomness is evidence for early life stress, he said.

Hujoel emphasized that crooked teeth, overbites and underbites are different than an asymmetric bite. Those conditions can be associated with asymmetric and symmetric bites, the latter of which is largely a reflection of genetics, not environmental stress, he said.

So, no, crooked teeth don’t predict early death in and of themselves. It’s the bite that’s telling – how the teeth come together. Even then, an asymmetric bite isn’t a death warrant, particularly if you take action to support your health and lower your risk of all manner of chronic diseases. 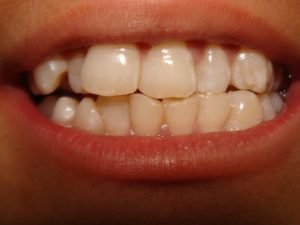 There’s also plenty you can do to correct bite problems, whether they’re the result of early environmental stresses or later ones. In fact, correcting issues with the bite can lead to overall health improvements.

Consider bruxing, for instance – habitual clenching and grinding, often during sleep. While commonly associated with stress, it can also be an unconscious way of coping with a bad bite or even a compromised airway. Bruxing, in turn, is associated with sleep apnea in both adults and children.

And sleep apnea is associated with a wide range of chronic health problems, including heart disease, diabetes, and stroke.

Interventions like oral appliance therapy and appliance-free DTR can do wonders for correcting bite-related problems. Lifestyle changes – especially in the area of diet and nutrition – can likewise be of help. The specific approach, the best approach, depends on your specific health situation and how it got that way.

For above all, and always, we want to treat the cause, not just help you mask or “manage” symptoms.