Do 4 out of 5 Holistic Dentists Recommend Chewing Gum? 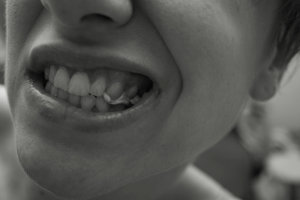 Sugar-free chewing gum can be useful stuff. It can make your breath minty, “pop” your ears on a long flight, increase salivary flow, maybe even help your memory. (Yes, really.) But can it keep bacteria away from your teeth?

Maybe so, according to a recent study in PLoS ONE.

Comparing two types of chewing gum, the researchers found that some oral bacteria become trapped in the gum – a little over 100 per piece.

Although this number may be considered low, it shows that when gum is chewed on a daily basis, it may contribute on the long-term to reduce the bacterial load in the oral cavity, which is supported by observations that long-term studies on the use of chewing gum cause a reduction in the amount of oral biofilm.

It’s roughly the amount removed by flossing and brushing without toothpaste.

What’s more, seeing a decrease of bacteria trapped the longer the gum was chewed, the authors note that some bacteria may actually be killed by specific ingredients in the gum, such as “sweeteners like xylitol, food preservatives or flavoring agents like spearmint and peppermint, which are reported to have antimicrobial properties.” (Learn more about xylitol in our previous post.)

But before rushing out and buying a bunch of gum, know that it’s no replacement for brushing and flossing. As Dr. Bicuspid reports,

[Lead author Stefan] Wessel emphasized that brushing and flossing remain more effective in reaching many areas in the mouth, and that sugar-free chewing gum should not be seen as a replacement but as an addition to both techniques.

Nor is gum selective about which bacteria it traps. It takes good along with the bad, health-promoting microbes as well as pathogens. By the same token, that it removes bacteria gradually

is preferable to sudden ecological shifts that can change the relationship between the oral microbiome and the host as another potential cause of disease, they concluded.

A healthy mouth is not a 100% “germ-free” mouth – as if that were even possible. Rather, we understand now that it’s about maintaining an overall healthy balance of oral flora.

This was a small study – and funded by Wrigley, a company that definitely stands to gain from such results. If future research backs up the findings, we may see the development of products that can selectively remove pathogens.

Given the possible benefits, it’s hard to think of a reason not to chew sugarless gum, but some dentists still encourage caution due to habitual chewing putting extra stress on the jaws. And if you have mercury amalgam “silver” fillings, best not chew at all, as it can accelerate the release of mercury from those fillings.