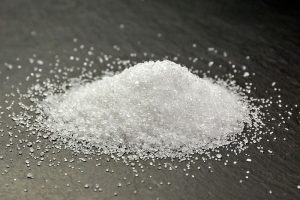 While our number one post last year was the one on how we’re doing dentistry safely through the pandemic, some older posts were viewed even more often. That includes our 2015 overview of erythritol, which was just then starting to get some real attention for its potential to prevent tooth decay.

Now, new research suggests that it could have a role to play in treating gum disease, too.

For the study, published late last month in BMC Oral Health, 42 patients with moderate to severe gum disease were given standard periodontal cleanings. Half also received air polishing with an erythritol powder. The results? ,

After six months, those treated with erythritol had significantly fewer sites with a probing depth of at least 5 mm than those who didn’t receive erythritol. The erythritol-treated patients also saw reductions in the amount of the periodontal disease-linked bacteria Tannerella forsythia and Treponema denticola after six months, compared to baseline, Jentsch and colleagues reported.

That’s really promising. Yet this was just a small study. More, it was also done without a control group – that is, a group who got the air polishing but without the erythritol. It could well be that the air polishing was the difference-maker rather than the sugar alcohol.

However, other research comes down in favor of erythritol, as well.

For instance, one 2016 review of the science found that erythritol was more effective than either sorbitol or xylitol for supporting good oral health.

Oral health studies revealed that erythritol can reduce dental plaque weight, reduce dental plaque acids, reduce counts of mutans streptococci in saliva and dental plaque, and reduce the risk for dental caries better than sorbitol and xylitol, resulting in fewer tooth restorations by dentist intervention. Systemic health studies have shown that erythritol, unlike other polyols, is readily absorbed from the small intestine, not systemically metabolized, and excreted unchanged within the urine. This metabolic profile renders erythritol to be noncaloric, to have a high gastrointestinal tolerance, and not to increase blood glucose or insulin levels. Published evidence also shows that erythritol can act as an antioxidant and that it may improve endothelial function in people with type 2 diabetes.

Yet other research has focused specifically on erythritol’s impact on the oral microbiome, such as this 2017 study in the Journal of Oral Microbiology. Testing different concentrations of the sugar alcohol on biofilm samples treated with saliva from 20 healthy participants, researchers found that erythritol appeared to reduce harmful bacteria, keeping the biofilms from becoming destructive.

As ever, more research remains to be done.