Rinsing after you brush and floss is a good idea. It washes away bacteria and other microbes you’ve just spent the last few minutes removing from your teeth. And if you use an antimicrobial rinse, you get a little extra protection from that, as well. 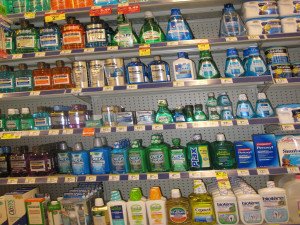 But not all mouthwashes are created equal.

Many mainstream brands, for instance, contain alcohol – partly for its antiseptic qualities, partly because it’s a good solvent, allowing the manufacturer to better blend the other ingredients. Yet when it comes to oral health, it may not make much of a difference according to new research in the British Dental Journal.

Naturally, this raises the question: If it doesn’t make a difference, why use alcohol at all?

For it does have its downsides – especially in that alcohol tends to dry out the soft periodontal tissues. If the dryness becomes chronic, it becomes more than just an annoying feeling. It becomes a real problem. Chronic dry mouth raises your risk of a whole host of oral health problems, including enamel erosion and caries (cavities), gum disease, oral infections and bad breath – all of the problems you were trying to prevent.

Plain chlorhexidine has its problems, as well. Many participants in the BDJ study reported both staining and discomfort.

A high proportion of subjects in the chlorhexidine mouthrinse groups reported TRAEs characteristic of those known to be associated with prolonged chlorhexidine use including discoloration of the tongue and oral tissues, alteration of taste sensation, burning sensation of the mouth, dry mouth, oral desquamation and loss of sensitivity to sensory stimuli in the mouth.

And as we noted before, research has suggested a number of potential negative consequences from changing the balance of oral flora (bacteria and other microbes) as dramatically as chlorhexidine can.

Fortunately, there are healthier, more natural options available – options that can be at least as effective as chlorhexidine but without its side effects. Research has shown some particular essential oils commonly used in natural dental products may be especially effective. For instance, one study in the Journal of Contemporary Dental Practice found that “cinnamon oil, lemongrass oil, cedarwood oil, clove oil and eucalyptus oil exhibit antibacterial property against S. mutans” – the major bacterium involved in tooth decay. A study in Acta BioMedica found that cinnamon oil inhibited “all the ten test bacterial species involved in dental caries.”

Powerful, effective and side-effect free? Sounds like the ideal choice to us!