Building Trust in the Mind-Body Connection 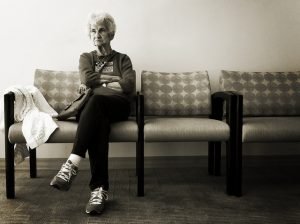 Our body talks to us. Got a sore back and a stiff neck? Could be your body’s way of saying, “Don’t sit hunched over the computer so long.” That stomach acid coming up your esophagus at night? Your body saying, “Hello, how many times must I tell you not to lay down right after you eat?” And more troubling, unexplainable fatigue and a gnawing feeling about it.

But it doesn’t end there.

A recent study shows our active listening to the body’s conversation goes into our psyche where it gets turned into feelings about our health. And researchers have determined that those feelings may have greater implications for our health outcomes – including mortality – than even medical tests do.

Recycling data collected a decade ago from 1500 participants gathered for a study on the relationship between stress and health, researchers evaluated their blood tests for active oral herpesvirus and matched the results to a self-assessment questionnaire.

Oral herpesvirus was selected because most people are exposed to at least one species of these viruses in early life. Herpesvirus is also a marker of decreased cellular immunity and one that advances inflammation in the body.

To be clear, having a herpesvirus “doesn’t mean you’re sick,” explained one of the study authors in a press release.

It’s probably been dormant in your cells for most of your life. But because it reactivates at a cellular level and prompts the immune system to fight it, it becomes a great marker of how the system is working.

And what did the researchers find?

This study is a powerful reminder of the mind-body connection, which is just as important to dental care as medical care. It underscores the importance of our listening deeply to what patients say when sharing their symptoms.

While clinical tests can measure physical, physiological or biochemical data, they can’t speak much to what the patient is experiencing.

Tests don’t pick up subtle markers of disease – symptoms such as fatigue, headaches, sleep disturbances, degree of discomfort, and how often symptoms appear. For that information, direct input from the patient is required.

Too often patients share with us how they’ve seen multiple dentists who looked at them like they’re crazy when they told them they started getting sick after mercury was placed. They consulted doctors, answered questions, took various tests. “Nothing” was found.

When doctors and dentists can’t explain it, patients may leave those offices feeling it’s all in their head. But for all of you have ever felt that way – or feel it now – you you aren’t crazy.

You were right. You had feelings of disease. We encourage you to trust that. And to keep trusting that.

And seek care from a biological dentist or integrative physician who understands that; who has the right knowledge and technology to evaluate potential causes of your problems; who will work with you to map a path towards healing.