About Those So-Called “Silver” Fillings… (Part 1) 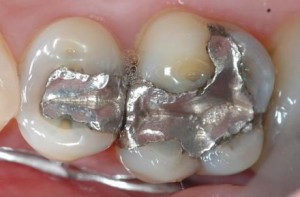 Calling them “silver” is such a misnomer.

Oh, they do contain some silver. Mostly, though, they contain mercury.

Yep, you read that right: mercury. And not just a little bit. About 50% of dental amalgam – the official name of the metal alloy used for filling carious teeth (cavities) – is made of this known neurotoxin. (The rest of the alloy typically includes silver, tin, zinc and copper.)

Mercury is so dangerous that if you were to be exposed to it – say, through dropping a new light bulb or old thermometer – you’d be told to leave the area immediately and call authorities for safe clean-up. When a dentist removes it from a tooth, it must be handled as toxic waste.

The Royal Society of Chemistry describes mercury as “a virulent poison, readily absorbed through the respiratory tract, the gastrointestinal tract or through the skin. It is a cumulative poison and dangerous levels are readily attained in air.”

Yet the US and other parts of the world, all too many dentists continue to use mercury to restore teeth.

Several years ago, the FDA looked like they might be changing their tune with respect to this dental material. They added a new statement to their website:

Dental amalgams contain mercury, which may have neurotoxic effects on the nervous systems of developing children and fetuses.

But then the new language – which has been documented by mainstream news sources, holistic organizations, blogs, documentaries and the like – rather suddenly disappeared.

What you’ll find there today is a discussion of amalgam and potential risks, but no definitive or direct statement of mercury’s demonstrated effects on the human nervous system and brain. (To learn more about the politics behind the agency’s apparent waffling, see this and this.)

Truth be told, we’ve known about the health risks of mercury amalgam since at least the early 19th century. In fact, the first professional dental association in the US held that amalgam should not be used. Yet some dentists wanted to use it anyway. After all, it was cheap, easy to work with and provided durable, functional restorations. A couple dozen of these dentists broke away from the society because of that and formed the American Dental Association (ADA).

These days, the ADA still holds that mercury is perfectly safe for filling teeth. Unsurprisingly, they were none too pleased with Dr. Oz’s coverage of the amalgam issue on his TV show earlier this year. Ultimately, they pulled their support from a consumer health site Dr. Oz co-founded and remains involved with.

The ADA, FDA and others who continue to swear by amalgam’s safety insist that the amount released is so small as to pose no hazard at all (despite the fact that no “safe” level of exposure to this neurotoxin has ever been recognized). The amount, in fact, can vary greatly, as shown powerfully in the ITV documentary linked to above, where emissions from individuals’ amalgam fillings were taken. Though not scientific in the strict sense, the results of those readings were “in line with controlled studies” and ranged from 0 to more than 15 micrograms per cubic meter.

It’s important to remember that there’s no escape from such exposure. The fillings are there, 24/7. Mercury vapor is consistently released and inhaled, introducing it to the general circulation where it tends toward fatty tissues in particular – excellent storage sites for all kinds of toxins – but especially the brain, kidneys and liver.

According to the European Commission, the “largest source of mercury exposure for most people in developed countries is inhalation of mercury vapor from dental amalgam.”

Image via The Urban Clinic