A Look Back at…Thumb Suckers, Nail Biters, & the Hygiene Hypothesis 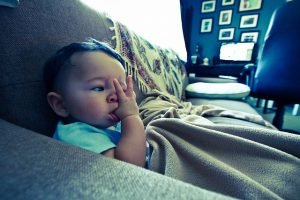 It’s hardly surprising that research has found that thumb suckers and nail biters are exposed to more germs. After all, parents have lectured kids about those germs for generations.

What may surprise you is that the research found health benefits from that hand-to-mouth exposure.

Specifically, the researchers were testing the hypothesis that children who suck their thumbs or bite their nails are less prone to develop allergies, asthma, or hay fever. So they looked at data from more than 1000 children in New Zealand.

When the study members were age 5, 7, 9, and 11 years, parents were asked about their child’s thumb-sucking and nail-biting status. Parents were asked if the statements “frequently sucks their finger/thumb” and “frequently bites their nails” applied to their child. They could choose from 3 responses: not at all, somewhat, or certainly. Children were considered to be frequent thumb-suckers or nail-biters if their parents reported that the oral habit in question “certainly” applied to them at least once.

Additional follow-up was done through the teen years and into middle adulthood. While those who were classified as thumb suckers and nail biters were less likely to test positive on skin tests for allergy.

Children who were reported to have either of these habits were less likely to have positive skin-prick tests at age 13 years and this apparent protective effect persisted to age 32 years. These associations were independent of sex, a parental history of atopy, and a variety of environmental factors known to be associated with atopic sensitization within this cohort.

No association was found with asthma or hay fever, though.

But lest you think the benefits make it a-ok to let your child persist in these habits, there are some big dental downsides to these parafunctional habits. (That’s a fancy way of describing the habitual use of a body part – like the mouth – for something it’s not normally used for. Other parafunctional habits include clenching and grinding, tongue thrusting, and cheek biting.)

Depending on the intensity and duration, thumb and finger sucking can interfere with proper growth of the mouth, shape of the palate, even the shape of their face! (You can learn more about such issues here and here.) It may shift the teeth out of alignment, creating the need for orthodontics later.

Nail biting can shift the teeth, too, as well as cause excess wear and lead to tooth fractures – and big dental bills down the road.

So yes, these are habits you want to help break – whether through something like myofunctional therapy or DIY solutions. What remains worth paying attention to from that study, though, is the light it shines on the hygiene hypothesis.

Originally, the focus was on

allergic diseases. It claimed that their recent rise in Western countries was promoted by reduced exposure to microorganisms due to improved hygiene conditions. Since these early observations, many epidemiological data have reinforced this theory, first on allergic disorders and then extending to autoimmune diseases.

If the hypothesis is correct, the dramatic increase in these diseases in industrialized countries seems to show that we may, in fact, be too clean for our own good.

And keeping our kids’ hands out of their mouths is just the start. In our germaphobic attempt to fight pathogenic microbes with an army of household and personal products designed to defend cleanliness, we appear to disrupt the balance in our microbiome; a balance necessary for health. And the consequence of imbalance?

an immune system that essentially gets bored, spoiling for a fight and apt to react to harmless substances and even attack the body’s own tissues. This could explain the increasing incidence of allergies and autoimmune disorders such as asthma, rheumatoid arthritis and inflammatory bowel disease.

* * *
There is also the suggestion that a diminished microbiome disrupts hormones that regulate hunger, which can cause obesity and metabolic disorders.

But clearly, there are way better, tastier, ways for your kids – and you – to help a healthy microbiome bloom than sucking fingers and biting nails!